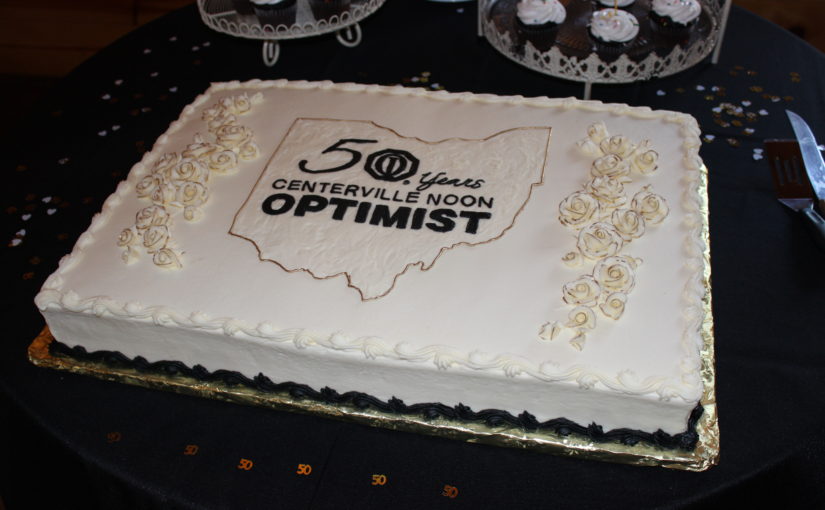 All Photos from the Event are Here

Our club was started in 1968, so for Tuesday, June 19, 2018, there was no lunch meeting. Instead we had a wonderful evening of feast and fellowship at Canopy Creek Farm. This was a great night to celebrate all we have accomplished in being a Friend of Youth for 50 YEARS!

The social committee is chaired by Beth Duncan with members Diane Arehart, Vida McDowell and Jerry Stahley. This team and their crew of assistants put on an amazing party. We started with appetizers then we had food catered by City Barbecue and Nashville Hot Chicken. There was a special anniversary cake for dessert. The committee went above and beyond in the amount of work they had to do for us to have an amazing time. The committed worked before and after the party. The before effort is why it looked so amazing inside the building. It was like a fancy wedding reception yet on a reasonable budget!

President Chris McAlpine started the party/meeting leading us in the pledge and of course before we ate, Phather Phil gave us one of his inspirational prayers.

There was an excellent slide show of pictures running continuously during the evening. It was briefly stopped to show the award-winning video Greg Griffin, Debe Dockins, and Julie Noeth put together a couple of years ago about the club. The stars of the video are the club members. Thank you to Greg Griffin for his great efforts in arranging and setting up the video and PA systems. This was not simple since the venue had nothing in place.

The emcee for the evening was Joe Madden. Joe was wisecracking all the while helping us hear stories and learn about the history of our club. All of the previous presidents present shared stories from their time as president and the interesting things that occurred during their term.

To work off some the delicious food, Joe helped us get some exercise by having everyone stand up and then sit down based on how long you have been a member and then again based on how old you were.

Tom Novak chair of Avenue of Flags, announced we have broken the 2000 subscription barrier and are now at 2025. Tom expects the count to go even higher before the Independence Day deliveries.

There was also an opportunity to browse through the scrapbooks of previous presidents.

Music for the evening was expertly provided by Tom Greenlee.

We will be back to our normal schedule next Tuesday, 6/26/2018 at noon for lunch at Yankee Trace

Our President Chris McAlpine had a special surprise for his mother. He called her up to the podium and announced how lucky it was that her birthday is June 20, the day after our party. This qualified her birthday to be close enough to get the Happy Birthday song treatment. Don Kelley directed us in singing Happy Birthday. I have to say this has to be in the top 10 most messed up performances of Happy Birthday in human history. This is now the 3rd straight week we have subjected ourselves and a seemingly innocent bystander to an audibly awful yet nicely intended rendition of Happy Birthday. If there is a fourth week in a row, this reporter will be wearing ear plugs!

Statistics to be proud of during the CNO 50th Anniversary 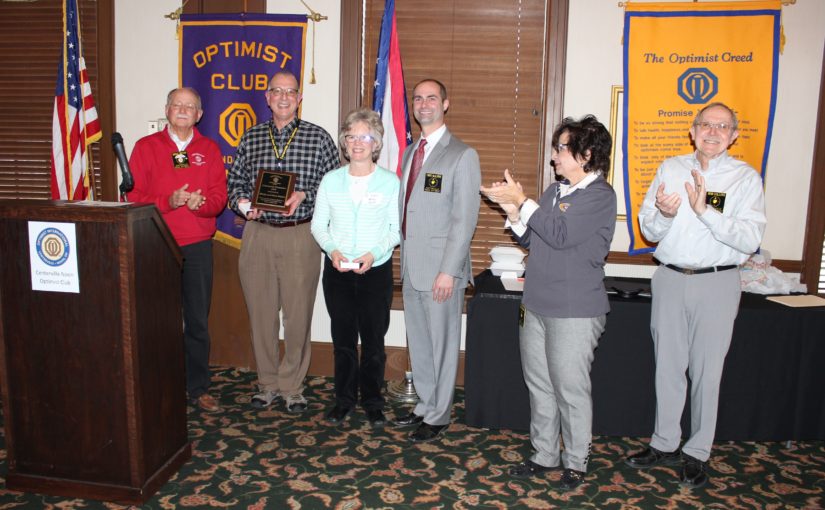 Heavenly Father our brains are our biggest asset and at same time our biggest problem. Sometimes we think so hard about something that we create a problem that wasn’t even there in the first place. Our brains are in
motion constantly even when we sleep. We make ecisions based on knowledge, instincts, and experience. Yet, many times we find out that what we thought was true just ain’t so. All this boils down to, thinking is
something that we must do with tremendous care. Lord help us with our thoughts for they turn Into words, words promote actions, actions led to habits, habits define our character and character becomes our destiny.
Amen!

The Centerville Noon Optimist club was started on March 19, 1968. We celebrated the 50 year milestone with an upgraded lunch buffet at Yankee Trace and a beautiful cake. Thank you to the social committee for a wonderful lunch!

Paul Stull, who was inducted in January 1969, presented to us some of his memories from 50 years ago. No one has been a member of CNO longer than Paul. It amazed him how much the Centerville area has changed and grown since our club started. McEwen road and Route 725 were very lightly travelled. He would go running in that area and not see a single person.

Nancy Lehren was inducted on November 1994 and she gave us some perspective on our club at half of its age. She remembers that there were a lot fewer females in the club in 1994. In 1996, Jackie Corn became the first female president of CNO. Gail Aiken is the longest current female member of our club. Nancy has watched our club add these programs since she joined 25 years ago:

Nancy truly considers the club as family. She is thankful for such a caring group that helped her through her divorce and the loss of her brother.

Today we had the presentation of the 5th Annual Optimist Community Champion Award. It was presented to husband and wife champions, Mindy and Dean Heyne.

Mike Bevis briefly defined the meaning of the award and how the honoree is selected. There were nomination forms available on everyone’s table. The link above also contains the nomination form. Mike introduced Bob Collins, who wrote one of the Heyne’s nomination letters, and described to us the many wonderful things the Heyne’s do for children. Over the past 26 years they have loved and cared for 35 foster children. Bob presented to us what he wrote in his nomination. The text of Bob’s nomination letter and today’s speech is available below.

Bob introduced Brandon Barometti, the CHS band director, who also wrote a nomination letter for the Heyne’s. Many of the kids in the care of the Heyne’s have joined the CHS band. Barometti is thrilled he can be part of helping these children. The kids are succeeding above and beyond expectations. He gave us something to think about, ”If it takes a village to raise a typical family, what does it take to raise 37 kids, many with special needs?”

Judy DeMarco presented the award to the Heyne’s.

Dean Heyne briefly spoke after he and Mindy received the award. From their experiences, Dean and Mindy have learned that they judge much less; you never know what others are dealing with and the levels can be extreme. They appreciate ALL types of diversity, not just the typical diversity associated with race. He gave a big thank you to CNO for feeding the numerous kids we invited today and for the huge amount in savings it was for their budget!

Here is an article about CHS seniors Michael and Cody Heyne and the CHS band: https://www.mydaytondailynews.com/news/local/autistic-twins-excel-centerville-marching-band/1mmVDbrKWkoTqTVuUWo0UO/ 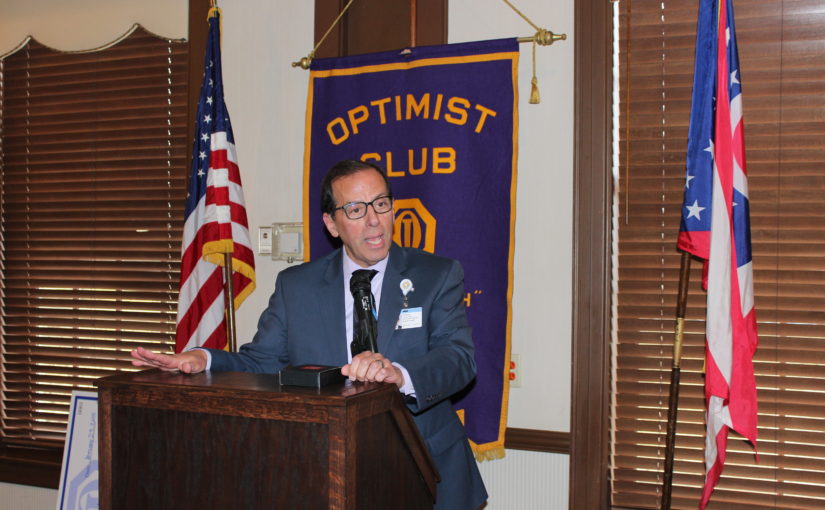 Heavenly Father when we ask our hearts,”how little can I do and remain in Your grace,” we become guilty of lazy sin. This is not different from ” how little can I produce and keep my job.” We should not want to be the big fish
in the little pond all the time. We need to tempt a venture out to deeper waters to build on the purpose we were meant to do with the gift of life you gave us. Grant us the courage to volunteer to do something we have been
hesitant to do because we are afraid of failing. Let us remember that the caterpillar was about to give up when it turned into a butterfly. Life without play is dull, without service it is meaningless. Amen!

Thank you to all who came to lunch today.

Despite the massive U.S. government shutdown, optimism triumphed and we still had a successful Centerville Noon Optimist meeting. We were even able to overcome not having official 50/50 raffle tickets. A fine for the missing tickets is pretty much guaranteed.

We had multiple speakers and topics today.

Our own Don Kelley discussed the long-range planning committee’s plans for celebrating our club’s 50th anniversary.  The celebration includes the following. 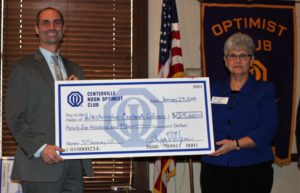 Library director, Kim Senft-Paras, accepted the check for the Washington-Centerville public library. She explained this donation allowed the library to add back their plans at the new Woodbourne library for an outdoor children’s garden with shade structures. The children’s garden was originally cut due to budget constraints. 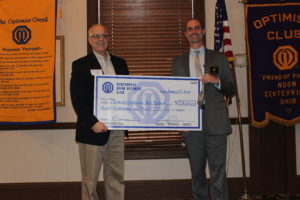 Executive director, Arnie Biondo, accepted the check for the Centerville-Washington Park District. He explained this donation will be used to build a new playground area at Forest Field park and include a nature area. It will use the latest materials and designs to make it safer and very accessible for kids with special needs.

Our next speaker was, Dr. Ramey PhD, a pediatric psychologist and the executive director for the Center for Pediatric Mental Health Resources at Dayton Children’s. He has been at Children’s for 38 years.

One in 3 kids has a major mental health problem at some point in their childhood. We need to do more earlier for mental health to help raise kids into adults that are caring and moral. Over the past 25 years there has been a 33% increase in issues caused by the need for perfection as a child. This shows up as anxiety, depression, or suicide attempts. There has been an additional noticeable rise in issues related to Social Media. Social Media should not be demonized, we have to find a way to help children and adults to manage social media experiences because they are not going away. In our area 8.6 percent of kids have attempted or seriously contemplated suicide. We need mental help to be easily accessible. Ramey says Children’s is working on it. Children’s hospital now will have 3 psychologists and 13 psychiatrists to help kids. In a year Children’s will open up a new 24 bed crisis center.  This should eliminate the need for Children’s on a regular basis to find an appropriate facility somewhere in the state to accept children in need.