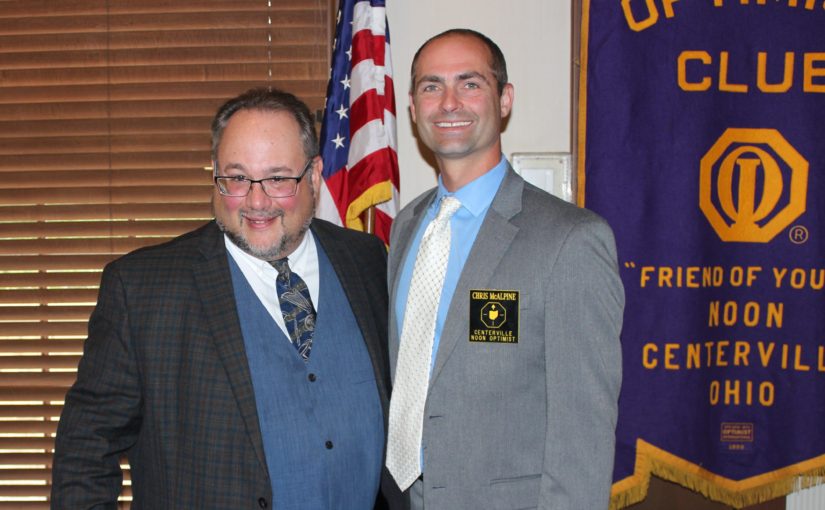 Phather Phil was not present today so Bill Stone offered the opening prayer after thanking the club members for their prayers for he and his family on the recent sudden passing of his brother, Bobby.

Tom Novak, Avenue of Flags, announced we will be delivering flags on 8/30-31/2018 for Labor Day. Please consider volunteering to help deliver and pickup flags. This team can always use more help!

Donna Huss asked if someone would PLEASE step up and chair the Communication Contest for the Deaf and Hard of Hearing (CCDHH) committee. Donna will help and has contacts. Someone from the Greene Optimist Club has volunteered to partner with us and help the new chair.

Chris McAlpine, President said there will be a board meeting at the Park District headquarters at 7 PM on 8/24/2018. Anyone can attend.

Myron Rheaume reported on the Ohio District OI convention over the weekend held in Fairborn. There were 151 registered delegates from 21 clubs. The International OI President also attended. Ten percent of the attendees were from the Centerville Noon Optimists. With the points from Awards and Achievements, we were ranked number three for the third quarter, but we should be number one by the end of the fourth quarter. Pat Behn received an award at the convention for achieving level 1 in the professional development program (PDP). She has achieved level 9 for Personal Growth & Involvement (PGI) program. She is also the incoming Lt Governor for Zone 14.

Jean Pummill, our secretary, further reported on the Ohio District OI conference. She presented various awards that they gave to her at the convention to distribute.

Gary Smiga introduced Alexandria Bollinger. We have renewed her $1500.00 scholarship at Brigham Young University where she is majoring in International Studies. She started Brigham Young University with 9 Credit Hours through Advanced Placement exams, scoring the highest score of  5 on all the exams. In college she completed 29 hours with a GPA of 3.17 studying Psychology, English Literature/Composition and English Language/Composition.

Alexandra has continued her activities and community service during college, including Promotions Manager at BYU’s Museum of Peoples and Cultures, Presidency of the Peace and Conflict Resolution Society, Model United Nations, Hip Hop Club, International tutoring Korean Women in English, Refugee Service Club, Korean Student Association, HELP International Humanitarian, study abroad/academic internship in Thailand building houses for families, and she is the Co-chair of the Family History/Indexing Committee at her church.

She spoke to us briefly and started off by thanking us for the scholarship. She spent 3 months in Northern Thailand working on sustainable projects. During her work she learned a lot about people. She also took a class that studied how to help reduce human trafficking.

Mike Bevis introduced Paul Helfrich, the President & CEO of the Dayton Performing Arts Alliance, a position he has held since July 2012.  He received his Bachelor of Music degree (with distinction) from Indiana University – Bloomington in 1984, and a Master’s degree in Arts Administration, also from Indiana University, in 1986.

Prior to his arrival in Dayton, he served 12 years as Executive Director of the West Virginia Symphony Orchestra in Charleston, West Virginia.  His time there saw a great expansion of the orchestra’s concert, touring, and education programs. Mr. Helfrich has also served as Executive Director of the Erie Philharmonic and Director of Marketing for the Kalamazoo Symphony.  He resides in Centerville along with his wife, Geanie, and children Donald, a sophomore at The Ohio State University, and Gabby, a senior at Centerville High School.

His presentation was titled, “The Dayton Performing Arts Alliance: An Update”.

From their web page:

In 2012, leadership of the Dayton Opera, Dayton Ballet, and Dayton Philharmonic Orchestra created a groundbreaking and innovative merger, forging these three art forms into one organization named the Dayton Performing Arts Alliance. This merger is the first of its kind in the nation—in no other city can performing arts lovers experience the dramatic collaboration with the range and depth of experiences being offered in the Dayton community.

The Dayton Performing Arts Alliance, with Dayton Philharmonic, Dayton Ballet, and Dayton Opera as its three crown jewels, has carefully planned for future success by creating a single management structure and business operating unit while preserving and promoting the integrity and identity of each of its three art forms. This alliance, unique in the nation, emulates the model of highly successful European performing arts organizations, taking artistic collaboration to a new level.

Since, 2012, they have served Over 95,000 people. They have also served more than 75,000 children through educational programs.

This season there will be 4 Ballets, 4 operas and 30 concerts from the Philharmonic incorporating several different types of concerts.

New Strategic plan after reflecting on the first 5 years.

A few of the upcoming Performances

The presenter to our lunch on July 17, 2018, Gerry Cohen, the president of the Miami Valley Pet Therapy Association (mvPTa), informed us that the venue for their annual major fund raiser The Howl Run / Walk, has been changed to The Mall at Fairfield Commons in Beavercreek. It is still on 9/29/2018 from 9 AM to 1 PM. In addition to the run/walk their will be costume contests. police demonstrations and silent auction gift baskets. You can register online. There will be 4 different 5K’s and 4 prizes awarded, 2 for walking and 2 for running, both of these with or without a dog.

A special thanks to Dave Kay for offering the opening prayer, a reading from The Old Testament,  before the start of our picnic lunch and meeting.

Today’s meeting was held outside at Forest Field Park. We enjoyed lunch on the picnic tables under the shelter. This was next to the new playground we funded with a $25,000 donation in honor of our 50th anniversary.

Nancy Lehren, Childhood Cancer chair, stated that Build a Bear for Sickle cell anemia was held on August 11, 2018. Thank you to everyone who helped participants create 116 bears, making the event a success for participants and volunteers as well.

Pat Behn said thank you to everyone who is donating school supplies for the Ohio Optimist District donation project.

Today was Vincent’s actual birthday. The singing was exceptionally bad, however, being an optimist, I noticed that because we were outside there weren’t four walls to reflect the sounds back at us.

Gary Hansen, the Will Cale Scholarship chair, introduced the recipients of this year’s Will Cale Scholarships. The first year of this scholarship was 2010. Dan Beck was chairmen for the first 8 years. This scholarship requires a Counselor’s recommendation and emphasis is on financial need and potential rather than academics or class standing. The scholarship provides up to $750 per semester for up to six semesters ($4,500 total) at Sinclair College, sufficient funding for an Associate’s Degree.

In addition to the funding each winner receives 2 mentors from our membership.

Zoe PIrslin is being mentored by Jane Fiehrer and Gary Hansen. Zoe brought two friends with whom she is currently living. She will be majoring in Visual Communications.

Victoria Brinkman is being mentored by Joan Cordonnier and Robbie Johnson. She was accompanied by her boyfriend who is also going to Sinclair and will provide her transportation. She wants to be a counselor and will be studying psychology and plans to transition to a 4-year school after Sinclair.

Mya Wehde is being mentored by Jayne Weikel and Rob Tinnerman. She was accompanied by her parents. She will be studying education.

During the meeting today, everyone that was a previous or current mentor was asked to stand and be recognized.

Gary Smiga introduced Jessica Barton. We have renewed her $1500.00 scholarship at Cedarville University where she is majoring in professional writing. She started Cedarville with 18 Credit Hours through Advanced Placement exams in High School. In college she completed 30.5 hours with a GPA of 3.939 studying: General Psychology, Introduction to Literature, American Government, Statistics, and US History I and II.

She has continued her Community Service including volunteering at the Americana Parade concession stands and with an unpaid summer internship as a Christian writer with a Christian Ministry Internship. She has also started writing her own book. 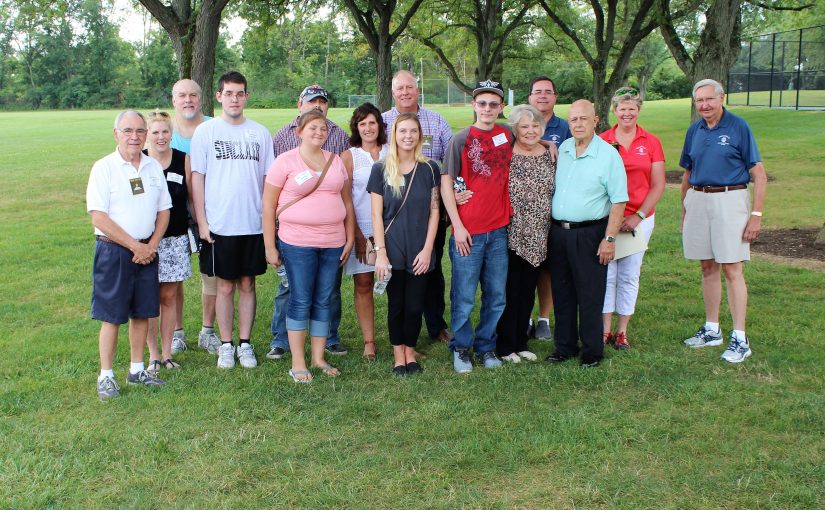 Heavenly Father, when we lose someone we know whether it is a friend or family member our heart aches at the loss. With regret we hurt because we didn’t get to tell them how much we love them or how much they have meant to us for just being them. Lord give us the wisdom to always thank another for all they have meant to us, for we never know when the last chance will be to reap the joy of giving. Amen!

Photos from the meeting

Dan Beck talked about the Will Cale scholarships and how the recipients are chosen. He acknowledged the committee and Will Cale’s 50 years in education and his contribution.

Tom Novak and Gail Aiken mentor Cameron Barber who was introduced with his family.

Will Cale and his wife, Sylvia mentor Eli Damron who was introduced with his parents.

Gary Hansen and Joan Cordonnier mentor Dominick Benincasa who was unable to join us today.

Dan and Kathy Beck mentor Ashley Long who was introduced with a guest.

Kathy Beck introduced Kelsey Sizemore, a past Will Cale recipient and success story. 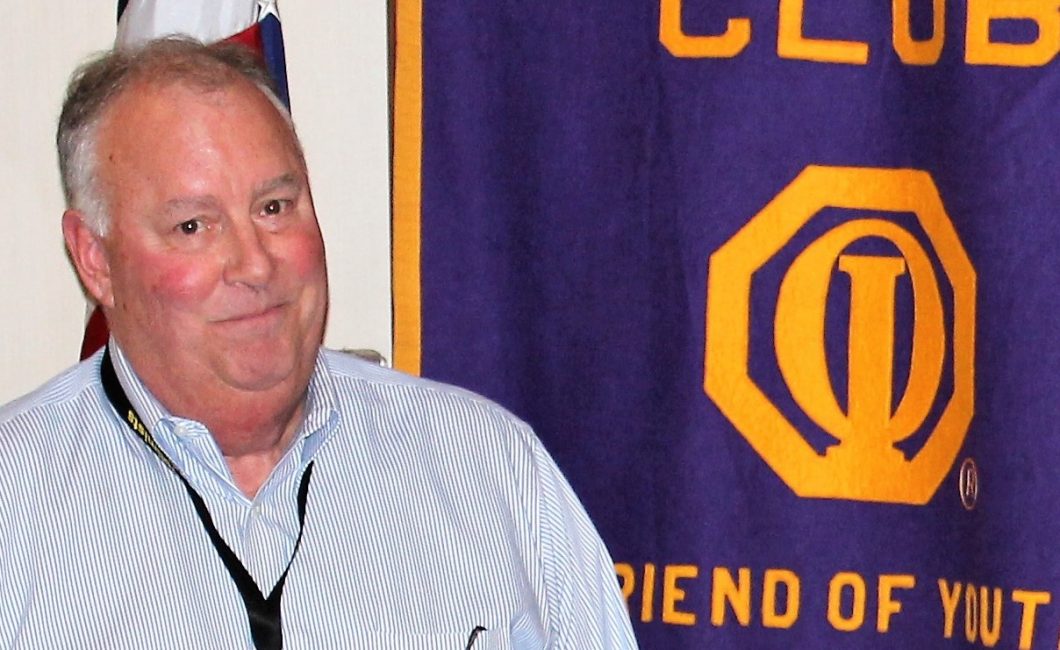 Heavenly Father, I think most everyone has seen ads on TV on insurance where they say ,”we will forgive your first accident” Knowing some of the drivers here that is a very compelling choice. Their promises pale by comparison to Yours Lord. For there are times when we are willing residents of the enemy camp. It’s then that we realize, how fortunate we are to have a God who loves us no matter what. A God that forgives us and all we have to do is ask. Help us to continue to prove we are good people
by our love and devotion to You and the Optimist kids. Amen!

“Above and Beyond” Award

Kelly Stone presented the “Above and Beyond” Award to Roy Barclay for his tireless behind-the-scenes support of the Christmas Tree Lot and the Oratorical Contest to name a few… Roy is a person who prefers to be out of the limelight, however his significant contributions to the club could not go unacknowledged. Congratulations – Roy!

Speaker Chantae McMillan – Medalist from 2012 London Olympics. and featured on the cover of ESPN magazine was unable to join us today.  Hopefully will be able to reschedule her at a later date. Thanks to Dan Beck for stepping in at the last minute to speak to the club!

Dan told the club about the Will Cale Scholarship – Created 10 years ago for youth in the community that are at risk or have had a rocky road in life. Students are referred by the Centerville Schools counselors. They receive $750.00 per semester, for 8 semesters, enough scholarship funds to obtain an Associate’s Degree at Sinclair Community College. Anyone interested in mentoring a student, contact Dan Beck.

This week the sergeants asked anyone who has ever played an organized sport to please stand – nearly everyone in attendance stood – and were summarily fined $1.00. 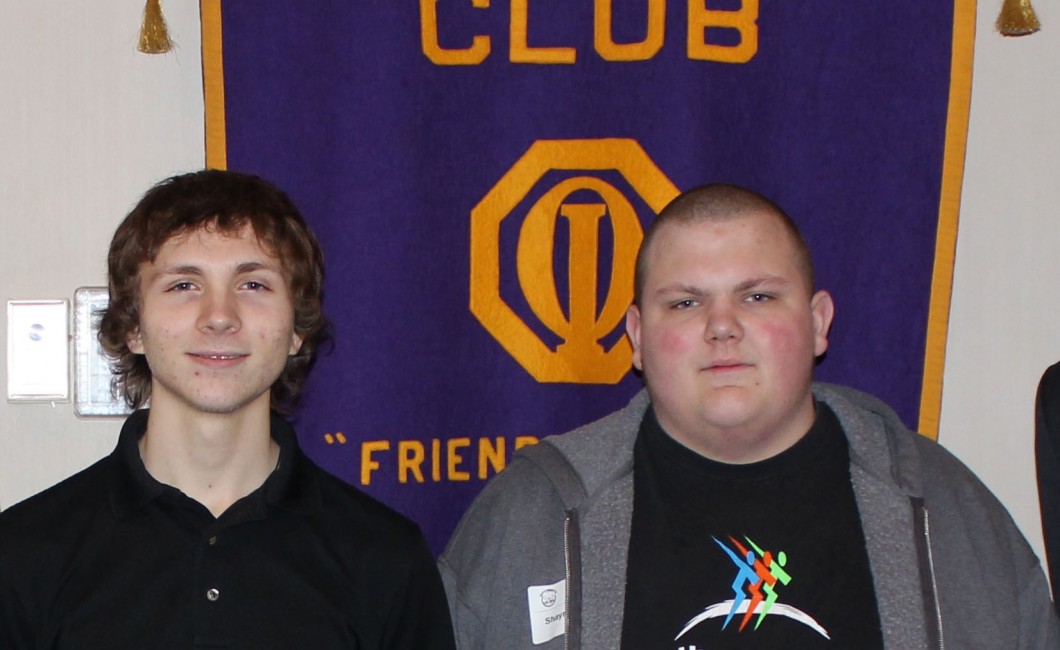