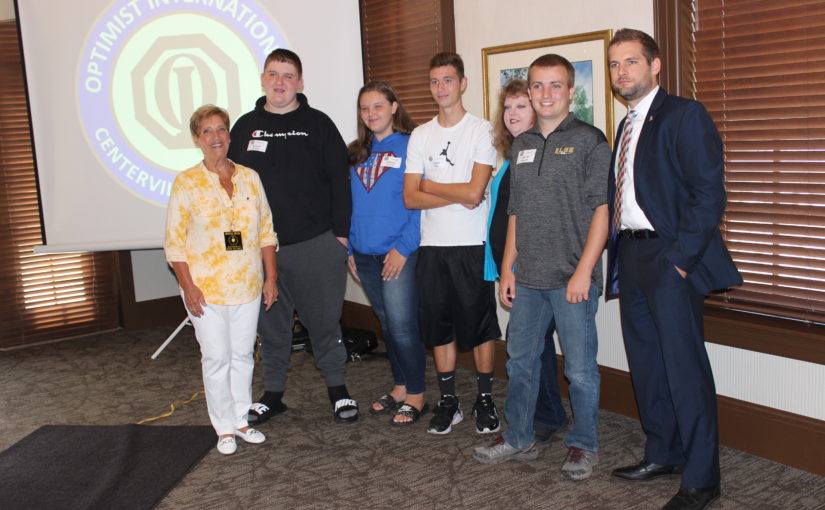 Thank you to CNO member Wasfi Samaan, owner of JD Legends, who presented a check in the amount of $525 to the Centerville Noon Optimist club from the proceeds JD Legends received from CNO members attending a concert on July 20, 2019.

Phil Robinson (aka the Chaplain of CNO, “Phather Phil”) turned 94 on July 26, 2019. He joined CNO on April 1, 1982. He was presented with many birthday cards. Even though it was not actually his birthday today, we still “sang” happy birthday to him. Not sure you can call it singing. Actually, you should not call it singing, not even close! The ceremony was led by Charlie Tapp and since it was a grand occasion, he was assisted by Bob Duffy. I guess this way neither man takes the full blame for the loss of hearing endured by us from our performance.

Donna Huss announced that we will have a booth setup at Boomerfest at St Leonard Center on Saturday, August 10th. We still need volunteers to work 2-hour shifts from noon to 6:00. Please contact Mike Bevis or Donna Huss to volunteer.

Greg Fay, Chair of CNO 2.0, said he would love to have additional members join his committee and bring with them fresh ideas. The next CNO 2.0 event will be at Heavier than Air on August 15, 2019. The meeting after that will be September 19, 2019 at JD Legends in Franklin OH. The speaker will be University of Dayton Men’s Basketball coach, Anthony Grant.

Donna Huss announced that the Ohio District Convention will be held in Fairborn from August 15-17, 2019. Our JOI club is requesting donations of school supplies to be given to Choices, Inc., which is a foster care program, serving 16 Ohio counties. Please bring your donations to lunch and Evelyn Griffin will collect the items.

Centerville High School partnered with our club to find students who have a desire and a financial need to pursue a degree in the skilled trades. Skilled trades are in high demand and this is a wonderful opportunity for a good job, to earn good money and have a great future.

Each student will be provided up to $750 per semester for up to 6 semesters at Sinclair. In addition to financial assistance, each student will have two mentors, which they just met today! The mentors are Fred Polizzi, Christine Balsan, Gary Hansen and Evelyn Griffin.

The first year of this scholarship was 2010. This scholarship requires a Counselor’s recommendation and the emphasis for selection is on financial need and potential rather than academics or class standing. The scholarship provides up to $750 per semester for up to six semesters ($4,500 total) at Sinclair College. This is sufficient funding for an Associate’s Degree. The goal is for the recipient to graduate from Sinclair with an Associate Degree. The hope is that some of them will continue their schooling and earn 4-year degrees.

In addition to the funding, each winner receives 2 mentors from our membership.

Not every student accepts the award. They may not want to go to Sinclair or they choose a different path. Keegan Gallant is currently considering joining the army.

Nine students are currently active in the Will Cale Scholarship program.

Gary Smiga was pleased to reintroduce last year’s 4 Memorial Educational Assistance Award recipients. Each of the 4 students was presented a $1500 check made out to their universities for them to submit toward tuition, fees or book expenses that they will have this coming academic year.

The following are notes from Gary Smiga:

To be eligible for a second award the students submitted a completed FAFSA to substantiate a continued financial need; an official transcript from their college or university that shows an end of freshman year GPA of 3.0 or higher; and a short outline of their continued participation and involvement in school, community or faith based activities.

Michelle Garrison completed her freshman year at Emory University with a GPA of 3.924.  Michelle has volunteered at Project Shine (Students Helping in Naturalization in English) where she helped refugee students with English acquisition and schoolwork and she was a member of PAWstive Outreach which is an organization that organizes weekly trips to a local animal shelter.  In addition, she attended EMT training sessions, earning her EMT Basic certification.  This summer she is working as a student intern at WPAFB, where she works in a lab analyzing sweat as a biochemical marker of human performance.

Allison Ormsby completed her freshman year at Wittenberg University with a GPA of 3.947. Allison played on Wittenberg’s field hockey and lacrosse teams.  At the end of her first semester she was named to the National Field Hockey Coaches Association Division III National Academic Squad.  She was also inducted into Alpha Lambda Delta, an academic honor society for first year success. Allison volunteered tutoring bilingual students in math, science, and language arts at Catholic Central Elementary and as a teacher in a 3-year-old classroom at the Springfield YMCA Child Center.

Anastasia Bair completed her freshman year at Walsh University with a GPA of 3.76.  Anastasia played on Walsh’s soccer team where she learned how to juggle 8 hours of practice time, 2 games per week, an average of 6 hours of travel, and tournament play that would run from Wednesday afternoon to Sunday evening, along with a demanding academic schedule.  She was very involved in her church, where she joined a community group consisting of other college students and young adults.  Their group volunteered to tear down after each church service since they were meeting in a middle school auditorium.  She also joined Students Helping Honduras, an organization fundraising for a trip to Honduras to build a school for children.  She is also a member of the Walsh University Nursing Club.

Danielle Meyer completed her freshman year at Wright State University with a GPA of 4.0.  Danielle participated in Theater and was cast as the lead actress in Woyzeck and appeared in multiple short films and feature films.  She was awarded Best Supporting Actress for the short film “Our Last Day”. For her high level of academic achievement, she was awarded a place on the Raj Soin College of Business Dean’s List.  She currently works as the manager at Scoops Ice Cream and as a Library Aide at the Washington-Centerville Public Library.

Each student introduced their guests and thanked CNO for our continued support. 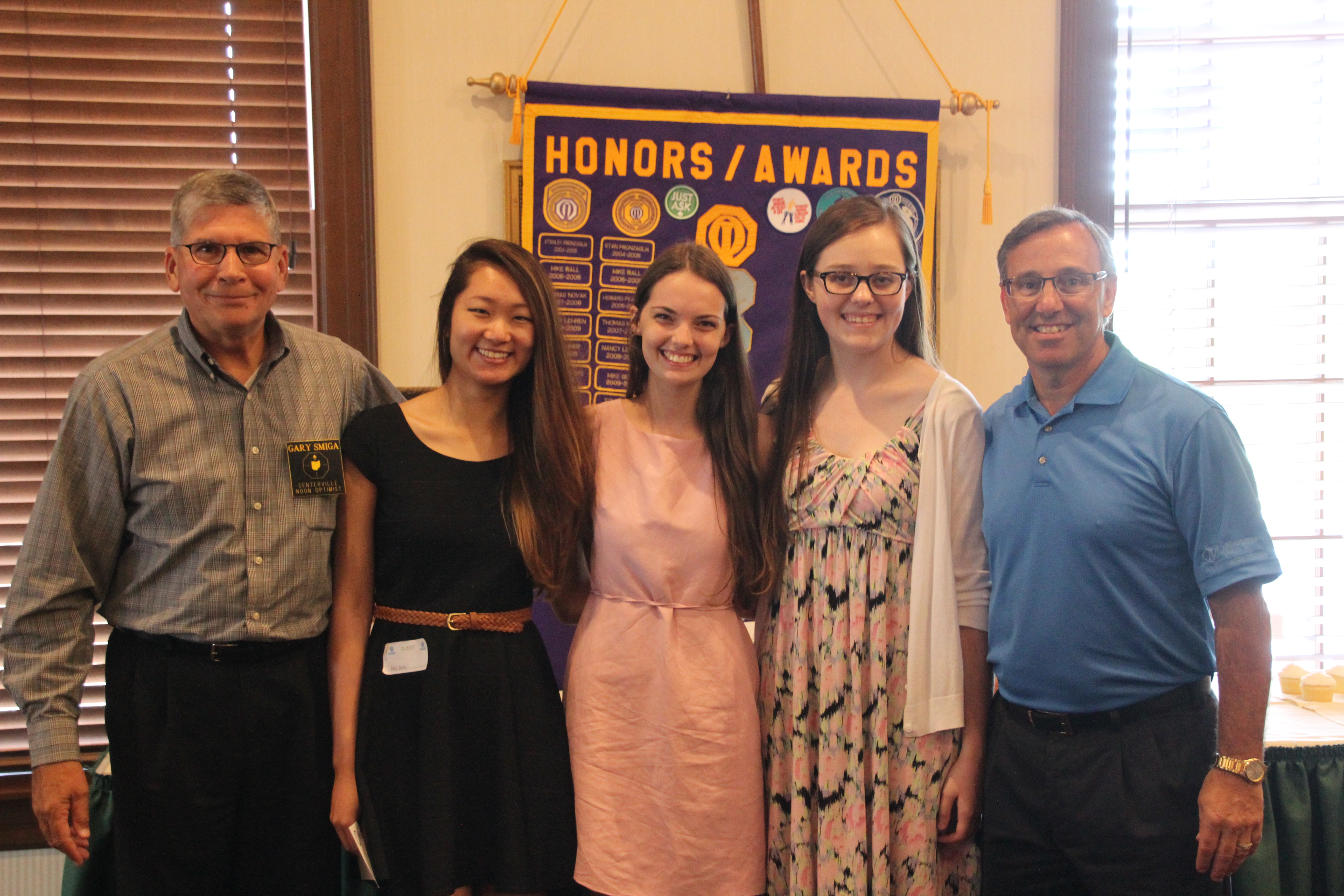 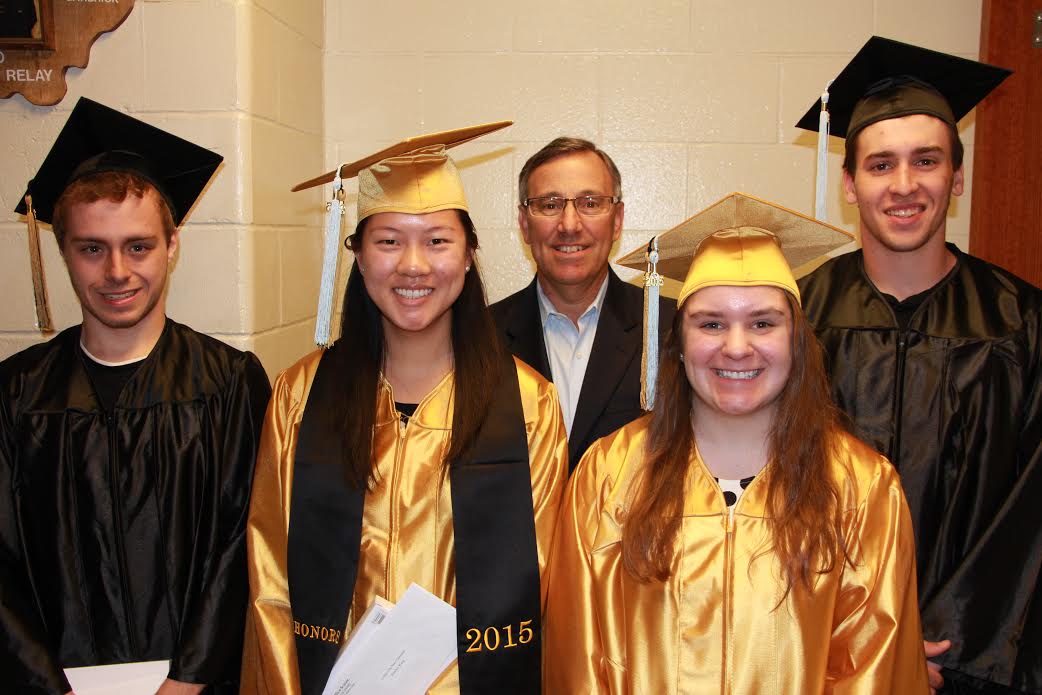 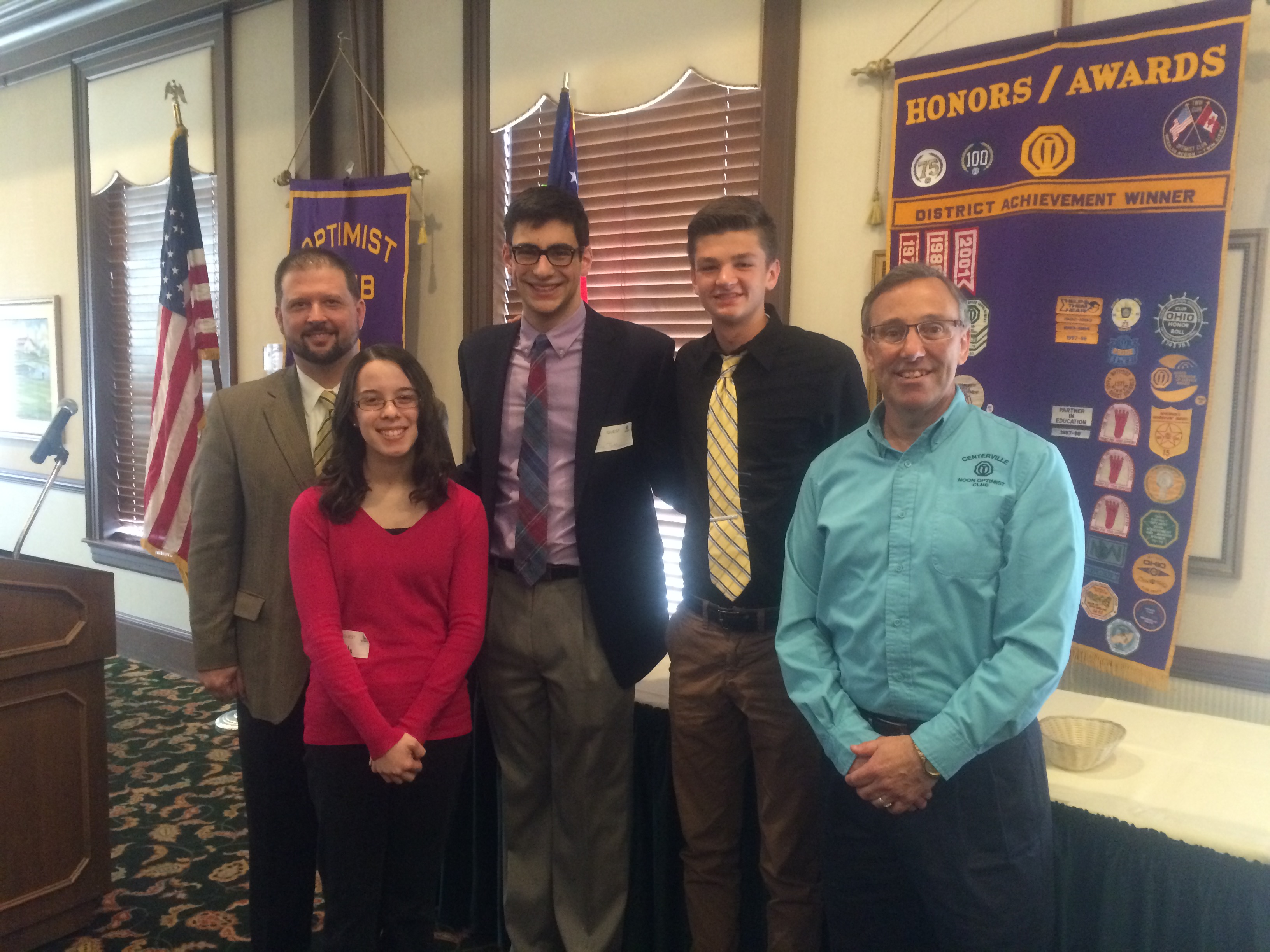