Nancy Lehren, chair of the Childhood Health and Wellness committee, announced that last Saturday there was a free drive through Build-a-Bear event for children with Sickle Cell and their siblings. To limit contact, we pre-dressed the bears and put them in plastic bags. We had 38 kids stop by to get a bear. Another 26 bears were left with Dayton Children’s Sickle Cell department to give to the children who were not able to attend. An additional 32 bears were given to the hematology and oncology department at Dayton Children’s for the nurses to give to patients when they receive their treatments.

Tom Novak, co-chair of the Avenue of Flags Committee, announced that they need several more volunteers before Labor Day. They especially need help loading flags into vehicles. The CHS wrestling team players are not available like they were in May since they will be back in school.

Larry Hansgen, The Voice of the UD Flyers

Ron Tinnerman introduced, Larry Hansgen, the WHIO Radio host of Miami Valley’s Morning News since 2003.  He joined the staff of WHIO Radio in 1981 as an overnight board operator and quickly rose through the ranks.  He became the Sports Director that year and in 1982 became the play-by-play voice of the University of Dayton Flyers basketball.  In 1988 he also added Flyers football announcing.

He started off saying to us, “This is how we are going to get through this (the pandemic). Clubs like CNO through cooperation are able to accomplish things.”

Pre-pandemic, he would be excited when his alarm goes off at 2:20 AM. His job has been more enjoyable in previous years. Now on the radio he often must announce unhappy news: a concert or festival has been cancelled. Still, he is an optimist. He may not start off each day as excited, but by the time his drive to the station is complete, he finds ways to believe everything will be OK. He thinks of something interesting or funny to say to his listeners instead of just the long list of woes everyone is experiencing.

In 2019, things were not going well for Dayton through August with the Memorial Day tornadoes and the Oregon mass shooting. Then the UD Flyer basketball season started, and the rest of the year was great. He remembers predicting very early in the season how fantastic this team was going to be.

He described the experience of the sudden end of post season play as being like you start falling, then realize your falling and you don’t have any control or choice but to fall. Once the COVID crisis hit, the sports world just halted.

He remembers it was a Wednesday and the team flew to New York to play in the Atlantic 10 championship. All the sudden at the stadium there was an announcement that the A10 tournament has been cancelled. The Flyers were on their way to a number one seed in the March Madness tournament. Event after event occurred in quick succession over 24 hours. First, they announced March Madness would play with no fans, and in the end the tournament was cancelled and the season ended abruptly.

Hansgen said that the reaction of head coach Anthony Grant was noteworthy. Grant gave a message of gratitude for the great season. This made sense because the team ends every practice with everyone gathering in a circle holding hands. Coach Grant then says, “Let us be grateful”. By everyone, Hansgen said it really is everyone around. The circle includes coaches, Hansgen and any others that are at a practice. Hangsen describes the after-practice ritual as being very similar to CNO Happy Bucks. It is a time players or coaches say something they are grateful about. Typically, what they say will be about something outside of the world of basketball.

A cancelled post season is particularly tough when your team has a great year. History associates the best memories of great teams with how they performed in the post season. Even with no post season, Hansgen said that UD fans have reason to be grateful for the 2019-2020 season. The team was the greatest ever and they have the potential to have another spectacular year for 2020-2021.

Hansgen was asked about recruiting this season for Flyer basketball. He said “Success begets success. They are getting high quality kids that want to be better people.” The coaching staff at UD want their players to be better people, not just better players. The word has gotten out that the coaching team will teach and treat the players well. Parents know their son will be a better person not just a better player.

Hansgen was asked if there will be a NCAA season this fall. He said, “The decision will be made in September. I know there will be some kind of basketball season.” NCAA basketball has a central leadership. The NCAA is building contingency plans to make sure the season happens somehow. There is no nationwide structure for college football, which is why some conferences have been cancelled and others have not been.

In closing, Hansgen said that history will be made this fall. Obi Toppin will be drafted into the NBA. The New Orleans Saints recently drafted UD football player Adam Trautman. This is the first time that UD players in the same year were drafted into both the NFL and NBA.

When the season was cut short and with his newly found free time, Hansgen decided to write a book detailing the fantastic 2019-2020 UD team and coach. The book will be released soon.

Click here to read Thank You Notes received this week

No Readings or Inductions this week. 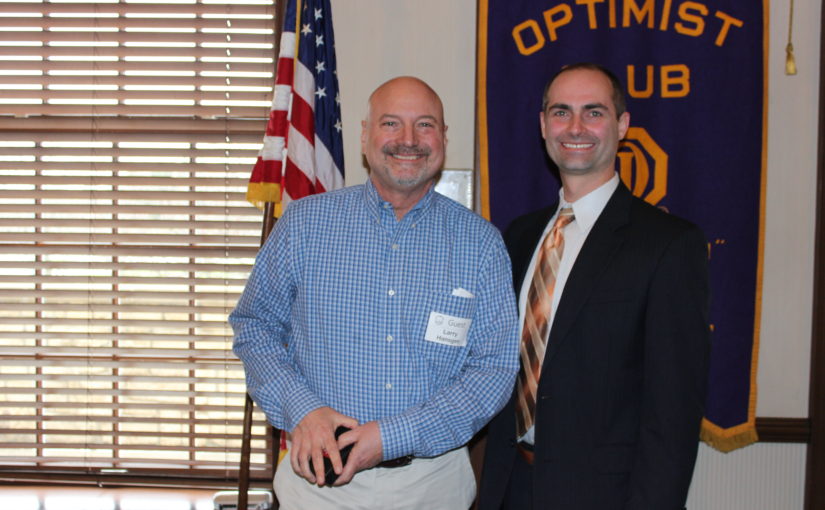 Heavenly Father darkness can not defeat darkness, only light can do that. Likewise hate will never defeat hate. Only Your love can do that. Lincoln made the point when he said,” if I make a friend of my enemy have I not defeated him?” Shed Your spirit on us to shed Your light on our dark problems. Have us love one another to show others how to live. When we meet a person for the first time, help us to not make a quick judgement, but
remember that there is nothing in a caterpillar that would make us think of a butterfly Amen!

Jean Pummill spoke to us about how the process works. Next week is the last of the 3 weeks. Three of the nominees got up and spoke for a short time. Summaries follow:

In case you missed it, please read the PDF below for the full content of the thank you Pat Behn presented for everyone involved in the 2018 Easter Egg Hunt on 3/31/2018. It was a great event and Pat wanted to make sure people were recognized for their extra efforts.

Montgomery County Sheriff’s Office Captain Jeff Papanek after 31 years of service is retiring from his position at the Sheriff’s office. He has been a CNO member since 7/17/2014. He plans on finding a new position with the township soon. He thanked Jess Lightle for being the best boss ever. President McAlpine thanked Jeff for all the wonderful “interactions” he has had with the Sheriff’s Office over the last couple of decades while he has been driving around town. Captain Jeff Papanek received a standing ovation from the 80 members and guests as a way of thanking him for his service to our community.

Scott Langer introduced today’s speaker, Larry Hansgen, long time WHIO Radio Personality, the voice of the UD Flyers and a stand-up comic. Scott first made sure we knew that our original speaker cancelled at the last minute and after just 25 phone calls to others to fill in he came to Hansgen who graciously agreed to speak.

Larry, who has spoken to us in the past, went through the events that led him to become involved in the radio business. He was very funny and there were several entertaining stories.

It was an intricate story how he got into radio and ended up in Dayton. He began with his NSA interviews during his Senior year at Bowling Green University. It involved California and the Farsi language. Fortunately, he was not offered this job.

His radio career started after graduation in 1979 in Bryan, Ohio as a high school sports announcer.

He has been with WHIO radio for 37 years and has been involved in all kinds of jobs. He credits his longevity to being flexible and taking on all kinds of different positions and responsibilities.

To become the voice of the UD Flyer’s, Larry had to jump through several hoops. He and Bucky Bockhorn had to record several auditions on cassette tapes covering the play by play of inner squad scrimmage games.

Larry has seen a lot of places in the world. What he values even more is all of the interesting people he was able to meet along the way.

Thank you Larry for informing and entertaining us today!