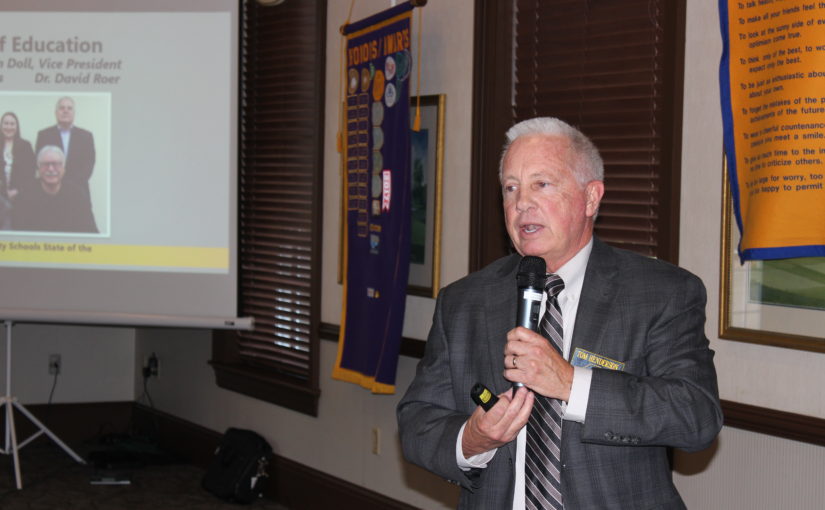 Greg Griffin, Jesse Gaither and Jean Pummill all received the 100-year pin for the “Promise Yourself” award.

June 1, 2019, 9AM to 11:30 AM is the Fishing Derby. Bob Lawson said to let those planning to attend know they need to fill out the registration form and bring it to the derby. Spread the word on Facebook! Registration is between 8:00 – 9:00AM. We supply free worms however you are permitted to bring your own bait and lures. We stock the ponds with approximately 400 pounds of Catfish for the Derby. There are other fish also in the ponds – mainly Bluegills. Prizes and trophies for all.  Children ages 5-15 are encouraged to participate and try this event. The event is held at Washington Township Rec Center, in two ponds.

Nancy Lehren, chair of Childhood Cancer Build-a-Bear, reported on the May 10, 2019 event. Patients and their family members assembled 83 bears. Volunteers assembled another 57 bears for a total of 140 bears. The extra bears are either for cancer patients unable to attend or are sent up to the nurses in the cancer unit and are handed out when a child needs a smile. Nancy thanked Bill and Kelly Stone for their $3000 sponsorship of the event. She thanked Ann McKenzie for her $1000 gift. The Adopt-a-Bear fundraiser raised another $1300.

Mike Bevis, golf chair, reported that there are only 60 days until the golf event. They are almost sold out. They are looking for donors and volunteers.

Katie Calloway announced that a new committee for Social Media has been created. Contact her if you are interested in participating.

Beth Duncan, social committee, announced that the next social committee meeting is on May 22, 2019 at 5:30 at Lizard Apparel and Promotions. The committee is actively seeking new members. Any CNO related member can participate. You can be a member of CNO 2.0, CNO, or CNO St Leonard.

Gary Smiga introduced Dr. Thomas J. Henderson, who since 2009 has been the Superintendent of Centerville City Schools (CCS). He is a graduate of the University Dayton and received a Ph D in Educational Leadership from Miami University in Oxford, Ohio. He has been a member of the Centerville Noon Optimist club since October of 2009.

Dr. Henderson spoke to us today about our local school system. He said he enjoys the relationship he has with the school board. Recently students have formed their own version of the board and it has been positive. Today those students are representing Centerville at a State Board meeting in Columbus.

Many of Dr. Henderson’s presentation points are reported below.

To see all points he went over, you can view his slide show here

CCS has many curriculum department services and programs. There are 32 different languages spoken by students in the district. There are 991 students in special education programs, many of these students have sessions with speech and language therapists.

Teachers continue to learn. To follow new legislative adjustments for gifted programming teachers will take 15 hours/year of continuing education in this area for the next 4 years.

He discussed CCS facilities. There are 14 facilities that have a total 1,279,709 square feet of space and 278 acres of grounds to take care of. All clinics are staffed by RN’s.

He reviewed information about the budget. From State funds, CCS is the lowest funded district per student in Montgomery County. Only 14% of their budget is covered by the state. They get $1,799/student, while some districts receive as much as $8,600/student. The state then deducts a total of $692,000 for students in the CCS district that attend charter schools. The state deducts $8000/student, not just the $1799/student.

Thank you notes received by CNO

We received thank you notes from Junior Golf and Centerville Band Boosters.