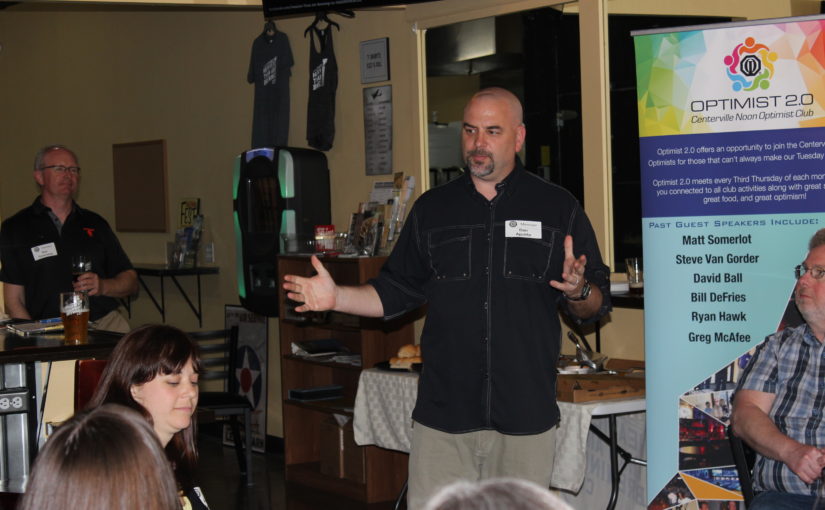 The venue for tonight’s CNO 2.0 meeting was Heavier than Air Brewing Company. Thank you to CNO member Nick Tarkany and his team for allowing us to take over their bar tonight.

There was a 50/50 drawing won by CNO member Judy DeMarco. With the raffle, $45 was raised for Optimist International.

We had 27 members and 5 guests in attendance.

Donna Huss inducted Mark Karns and Bob Crawford as the two newest members of CNO 2.0. That makes them part of CNO with all the same rights and privileges. Regardless of which CNO club you are in, you are welcome to volunteer for all fundraisers, community events and to participate on any committee.

Greg Fay, CNO 2.0 committee chair, gave us a summary about the club. He thanked everyone for coming tonight. He said it is great to be part of a club with some members who have over 30 years of service experience with the club.

Greg Fay introduced Dan Apolito, the co-owner of 2 Archer’s Tavern Restaurants (Centerville and Kettering) and The Stone House Tavern in Waynesville. Dan is a member of CNO 2.0.

Dan told us about the path that led him to owning three popular restaurants.

Dan was born in Bellbrook where his father was a police officer. At age 6 he moved to Centerville. His father taught at CHS and UD and had the Optimist Creed hanging in his home office. Dan attended CHS and worked at J.Alexander’s to help pay for his Bachelor’s degree in Management from the University of Dayton.

Dan was involved from the beginning of the restaurant at Yankee Trace golf course.

He interned at Disney World and learned a lot about great customer service from that experience.

Years after leaving J.Alexander’s, they invited him back to be involved in the management of their restaurants. The company moved him to Memphis, Louisville, Cleveland and finally back to Centerville where he and his wife Michelle wanted to raise their family. It was going pretty well except the manager of the Centerville J.Alexander’s had no plans to retire any time soon and he wanted that job.

Applebee’s reached out to him. He spent 8.5 years with the Applebee’s, the first 2 years at the Springfield restaurant and the last 6.5 years as the area director over several restaurants.

After Applebee’s he tried being a financial advisor, but he loved the service industry. He and Mike Fullenkamp (Dan’s partner in the restaurants) had discussions while he was a financial advisor about opening a restaurant together. They thought Centerville could support another restaurant. The idea was to blend the menu of Applebee’s with the same focus on great customer service that J.Alexander’s had.

Dan said he is often asked where they got the name Archer’s Tavern. They were about to open the first restaurant and they still didn’t have a name. They started with around 100 names and narrowed to 15 and still couldn’t decide. Dan decided to go to the Centerville Library and read a book written by the Centerville Historical Society titled, “Sense of Place”. There was a restaurant a long time ago in Centerville called, “Sign of the Cross King’s Tavern”. The owner of the restaurant’s last name was Archer. The restaurant was better known as “Archer’s Place”.

Dan and Mike always try to support the community. If you come in and say you live in the area and need a donation, they almost always help with gift cards or some other way.

Another question Dan is often asked is about the origin of the hamburger with peanut butter called, “Sticky Burger”. Dan is the food guy of the partnership, his partner heads up other areas. However, Mike suggested why don’t we put something weird on the menu. Let’s put peanut butter on a burger and see what happens. They sell tons of “Sticky Burgers”.

Dan credits great customer service for their success. They train their servers to help each other. Someone will greet you within 15-20 seconds of being seated. The goal is to keep customers coming back. If ever there is a problem with food or service, any employee has the authority to make it right without having to go and get approval.

Thanks Dan Apolito for sharing your story with us today!