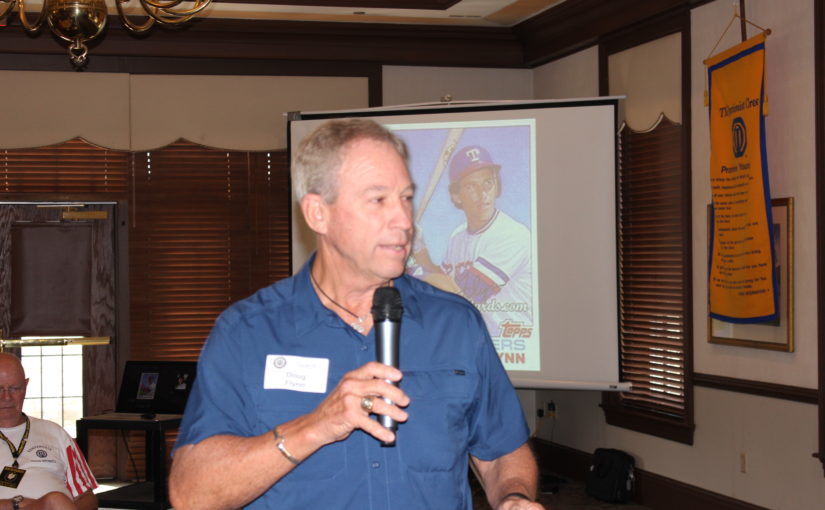 Heavenly Father for us to be known as Optimist it is best to be known
not by word of mouth or what’s printed on our shirts but by what we
do and how we act. Our Optimism membership is a 24/ 7 affair. Every
statement and action should tell the world that Optimism is the way to
embrace life. The cost of anything is how much of your life are we
willing to exchange it for. Just like money we can spend it any way
we want but only once. Continue to watch over us Lord and May we
always be proud, not of what we planted but what we have harvested.
Amen!

Bob Burkman announced that the move of the Avenue of Flags headquarters to Sinclair on Clyo Road is now complete.

Jacks Anderson announced that the next CNO 2.0 meeting will be September 19, 2019 at 5:30 at JD Legends in Franklin, OH. The speaker will be University of Dayton Men’s Basketball Coach Anthony Grant.

Jim Mogan introduced former Cincinnati Reds player Doug Flynn, Jr. When the “Big Red Machine” won the World Series in 1975 and 1976, Doug was on the team. He played in the Big Leagues for a few teams over 11 years. Beginning in 2013, Flynn works as a part-time radio broadcaster for the Cincinnati Reds. Doug has sung with the Oak Ridge Boys and Johnny Bench.

His first year with the Reds was in 1975. He said, “It was a pretty good time to be a Red.” Since he was not one of the great 8 on the team, Doug and the other players received a nickname. He said, “We were called the turds.”

He was one of the youngest on the team in 1975. He hopes to have another Big Red Machine reunion soon as they are not getting any younger. He said, “Can you believe that Pete Rose is 78 years old?”

Doug was happy to speak to at our lunch today, saying “I’m impressed when a club or group opens with a prayer and the Pledge of Allegiance.”

Doug’s discussion of his baseball experience was funny and very entertaining.

He mentioned, “Sparky Anderson got rid of me twice,” both from the Cincinnati Reds and from the Detroit Tigers.

During college Doug and some friends decided to drive up from Cumberland to try out for the Cincinnati Reds. Doug took a couple of ground balls and ran the 60-yard dash. The Reds kept calling him back up for tryouts. Finally, they decided to get him to play for the Reds organization. They asked what it would take for you to come play baseball. Doug said, “Maybe a Coke and a Hot Dog.” By accepting the offer, he gave up 3 years of scholarships for baseball and basketball at the University of Kentucky.

Before one game he was asked if he could play 3rd base. He said, “Sure I can.” He had never played third before. During the game the coach kept telling Doug where to stand and finally figured out that he never had played third base. The coach asked him, “Why would you say you can play third base when you clearly never have?” Doug said, “Because you asked me.”

In 1973, he was sent to AA from Single A. The next year he made AAA. In 1975, with 3 days left in spring training, Doug finally made it to the majors. The Reds had not finished well for several years before the 1975 World Series win and lost again in 1977 after Doug left the Cincinnati Reds. Because of this, Doug gave himself the nickname “the Glue”. This nickname has caught on and they now print tee shirts with this nickname, and it is raising a lot of money for military families.

He told of us of the “sick” humor of Pete Rose. While on a plane trip, Doug quoted Rose as saying, “You know, Doug, if this plane goes down, by the time they get to your name, no one will care.”

Doug got Rose and others back by showing up at the presentation of one of the great 8’s statue dedication outside of the Great American Ball park. Doug announced, “There they are ladies and gentlemen, the 8 most overrated players in baseball!”

September 2019 is now the month of Marty Brennaman. Doug wished the Reds had been better for Marty’s last broadcast year.

In 1975, when the Red record was 19 and 20, they were headed to Montreal. The night before the game, Sparky Anderson went to each of the rookie rooms and went off on them. Pete Rose said, “Sparky, get off the kids backs.” Pete, Johnny and several of the other team members in 1975 were protective of Doug and other young players. After being 19 and 20, the team went on to win 41 of the next 50 games.

In 1977 Doug’s role decrease drastically with the Reds and he was informed he was being traded to the Mets. When he found out it was for Tom Seaver, Doug asked, “Was I traded straight up?” The response was “No Doug, not even close.”

Doug missed the Reds and Cincinnati. There were more reporters in New York all looking for something to write about.

Doug said he was going to be on the radio with Marty for tonight’s game. CNO member and general wiseacre Beth Duncan asked Doug, “If we gave you a standing ovation, would you mention our club on the radio tonight?”. The entire room stood up, laughed and clapped.

Doug replied, “Yes and I was going to do that anyway. Marty loves this kind of thing.”

Doug ended his talk with, “I love you guys, thanks for having me come out and speak.”