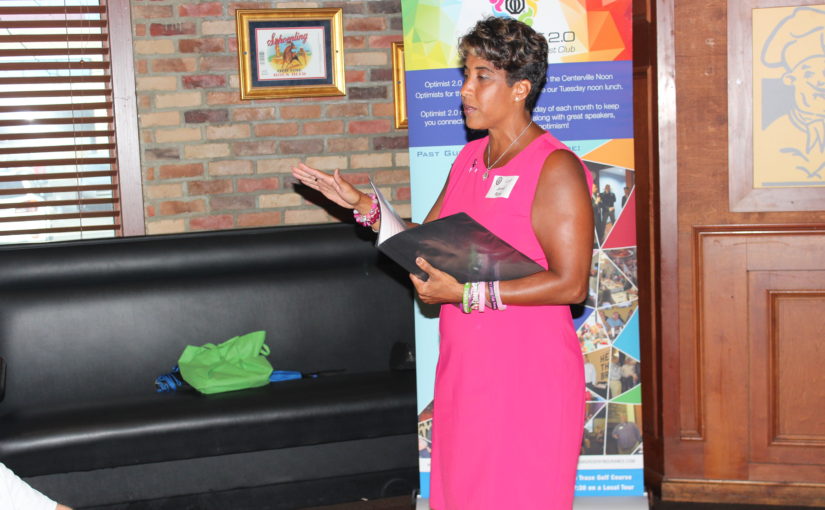 The venue for tonight’s CNO 2.0 meeting was Chappy’s Social House at 880 Washington Village Drive. Thank you to the team at Chappy’s for hosting us.

There was a 50/50 drawing won by Kayleigh Jackson.

Jesse Gaither, member of CNO 2.0 committee, thanked everyone for attending tonight. Jesse also mentioned our 3 fundraisers. We just finished our golf outing this week. We raise money from the Avenue of Flags program. We also sell Christmas Trees each year behind the Centerville Bureau of Motor Vehicles.

Jesse Gaither introduced Jenell Ross, the president of Bob Ross Auto Group. Jenell is a graduate of Emory University and a trustee at U.D. She is a chairperson for the Federal Reserve in Cincinnati. After her mother’s death from breast cancer, she and her daughters started the Norma J. Ross Memorial Foundation funding programs that raise breast cancer awareness, provide patient aid and research, and support local youth education.  The slogan “Pink Ribbon Driven” is also the name of their website. https://pinkribbondriven.org/

Jenell’s father, Bob Ross, purchased his first dealership in Richmond, Indiana 45 years ago. In 1979, he purchased the Mercedes and Buick dealership on Loop Road in Centerville, Ohio. Bob Ross was the first African American to own a Mercedes dealership.

She has always loved automobiles. She would hang around the dealership and would work in various areas. After graduating from Emory University, she became an official employee and was able to work with her father for 5 years before his early passing at the age of 62 in 1997.

Jenell explained that when the owner of a dealership passes it is typically a nervous time at a dealership. There is normally a mass exodus of good employees when the owner passes. This was not the case at Bob Ross. The employees were always treated well and there was a smooth transition. Her mother, Norma J. Ross, became president, and Jenell became the chief operating officer of the company. They have fun sometimes. They dress up for Halloween, Celebrate Christmas and do other fun group outings with employees and their families.

While president, Norma added the Hummer Franchise. Then the recession hit and made it very difficult to keep the dealerships running well in Dayton. The loss of NCR and DHL reduced the pool of customers. They spent a lot of energy trying to keep people motivated during this time. Some of their decisions were not perfect. They added dealerships for Alpha Romeo and Fiat, but they didn’t work out and they dropped the brands after about 1.5 years.

They survived the recession and currently have close to 100 employees. Even with the loss of GM manufacturing jobs in Dayton, they continue to be staunch supporters of GMC and Buick.

Jenell took over day to day operations at the age of 27. She also became the representative of the company at various conventions and meetings held throughout the year. Her first few meetings were a bit interesting. She is not the typical face of the owner of a dealership. Still, 22 years later some attendees make some bad assumptions about who she is. She has a little fun with assumptions and tries to use it for education.

She is proud of the Norma J. Ross Foundation. It has become her side job. Part of the foundation’s purpose is to help pay for mammograms that many women cannot afford. They have trademarked the slogan “Pink Ribbon Drive”.

Jenell shared her view of Keys to Success in any Business

In her closing she gave some thoughts about her success and her company’s success. No manufacturer is making a bad vehicle anymore. Success is about helping people get a vehicle that they want. There are a lot of choices in the automotive world. Business owners should be ethical and moral in everything they do.  The Centerville community has been great for them and she appreciates her customers and gives back to the community.

She didn’t start her company, however, for many years, she went to many seminars and was constantly learning about the industry and was therefore well prepared to take over at the age of 27.

No matter what your career path, continue to challenge yourself to reach new levels of success. The most important thing is to have fun at whatever you choose to do. Remember that only you can make yourself happy.

Thank you, Jenell, for taking the time to come and speak to us today! After her presentation, Tom Novak thanked Jenell for generously donating loaner vehicles to help with Avenue of Flags and the Christmas Tree Lot.