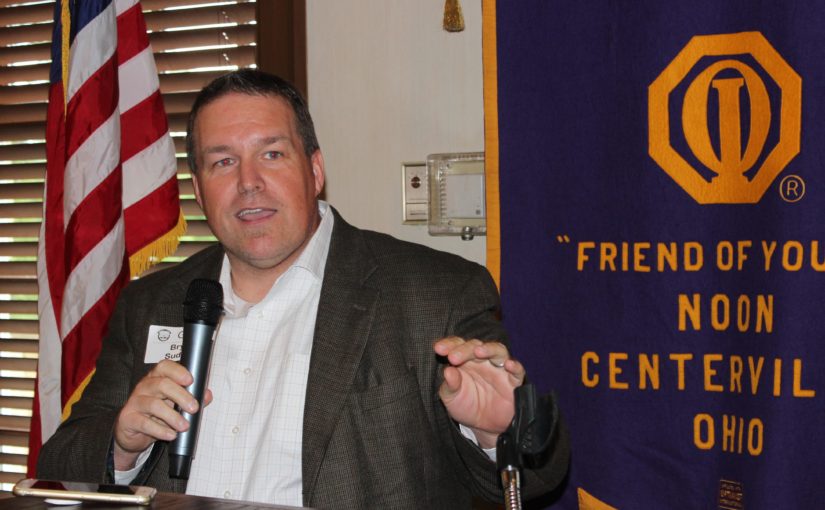 Heavenly Father I pray we are honest enough to admit our shortcomings. Brilliant enough to accept flattery without being arrogant, Tall enough to tower above deceit, Strong enough to treasure love, Brave enough to welcome criticism, compassionate enough to understand
human frailties, Wise enough to recognize our mistakes,
Staunch enough to stand by our friends and righteous enough to be devoted to Your love. For life without You is like an unsharpened pencil – there’s no point. Amen!

Tom Novak could use another flag-friendly vehicle for the July 4th holiday to help the 60 teams and 120 volunteers.

Bob Lawson needs help on August 4 for our booth at the Optimist Day in the Park in Kettering.

Bob Lawson stated that the CNO Float for the Americana Festival Parade will be on the CHS East side close to the theater. Decorations will be done on July 3 with a time to be determined.

Joan Cordonnier, Americana 5K chair, reminded us (while wearing all kinds of Red, White and Blue including sunglasses) that the fireworks will be on July 3rd instead of July 4th. Also, she needs more help on July 4th with the 5K.

Greg Fay, chair of Optimist 2.0, said last week’s meeting went well. The CEO of the H7 Network spoke and their various members who showed up as guests wanted to know how to be involved in service projects. Next meeting will be on July 19, 2018 at Poelking Lanes. Joe Poelking will be our speaker.

Beth Duncan, chair of the social committee, said the 50th anniversary party went great. Thank you to Joe Madden for making us laugh. Thanks to social committee members Diane Arehart, Vida McDowell and Jerry Stahley. Thanks to all the various people that helped. This July there will be a Euchre game. She plans for August to be an outing on BB Riverboats. In September will be the new president, officers and board member installation dinner.

Brent Richburg, chair of the Americans Booth still needs volunteers for July 4th, 2018 to help with the booth at the Americana Festival. Ideally he wants 3-4 people per shift.

Mike Bevis stated we still need a few single golfers to join teams that need additional players for the CNO golf outing. It is just 3 weeks until the golf outing. The committee also needs help putting together the baskets.

Chris McAlpine stated that we donated money to the park district to build a playground and we also get to help build it with some sweat equity as well. Come help on July 21, 8:30 until Noon at Forrest Field park.

Chris McAlpine told us the Ohio District Convention in Fairborn is August 17th and 18th. The Dorwood club has 35 members going and Chris knows we can beat them. There is still time and free funding left for you to sign up and go.

His parents and grandparents were good at storytelling and told them stories all the time. His message is there is great value in storytelling to the community. He spends his spare time writing stories and telling them. He loves telling stories, especially ones based on personal experience. Stories build empathy, and community. Your story is your story. We are all more alike than different.

Bryan told us a personal story.

After college one year, he went to Bellefontaine, Ohio, which is the highest geographical point in Ohio. Note that it is not really very high. While there is a ski hill there it is not like the ones out west.

He was living the dream because he was a summer camp director. He always wanted to be a lifeguard, but he never in his life had the right body build for this task. Memorial Day weekend is the dry run for summer camp counselors. After 4 days of training the 4th and 5th grader campers show up. You spend the first day explaining to them that they will be safe from raccoons or any wildlife in Bellefontaine. The next morning on the first full day of camp you give the swim test. His first time he gave the test to 65 kids. All the kids are lined up along the side of the lake. When he asked how many could swim, 62 out of 65 kids said they could. This was great news. The test is to swim out to the end of the boardwalk and back. If you pass the test then canoes, boats and other water activities are available. Kid number one steps up to try the test but he does not pass. He went into the water and once he was in over his head, he bobbed a few times. Luckily Bryan’s “comprehensive” 4 days of training kicked in and he grabbed the pole and got the kid to grab it. Turns out once the kids understood that swimming meant staying above water that is over your head the real number of capable swimmers is 4 out of 65, not 62 out of 65.

Story reminds of when he has gotten in over his head during life. Has depended on a pole extended by someone else to help him.

One of the kid’s continued to struggle to pass the swim test. He spent two days giving one-on-one training to this camper. He finally passed the test and enjoyed the water activities at the camp. This kid from Detroit was forever changed by someone reaching out to help him.

Next time someone you see needs help, think about how you can be the lifeguard and help someone that is in over their head.

He recently spoke at the Rotary Club. He said their room was bigger and had better food. When Chris McAlpine handed him our wonderful gift of a portable USB charger, Bryan exuberantly said that our gift was way nicer than what the Rotary Club gave him!

Dayton’s Story Slam hosted their second annual Grand Slam storytelling event on Tuesday, June 19th, 2018 at Wiley’s Comedy Club in the Oregon District. For more than 10 years Dayton Story Slam has hosted these “Moth” inspired evenings, attracting a wide variety of storytellers and stories. Bryan hosts Story Slam http://www.wileyscomedy.com/. Each month the first 10 names in the basket get to tell their stories. Each month winners are chosen and they advance with a chance to win the Grand Slam title for the whole year.