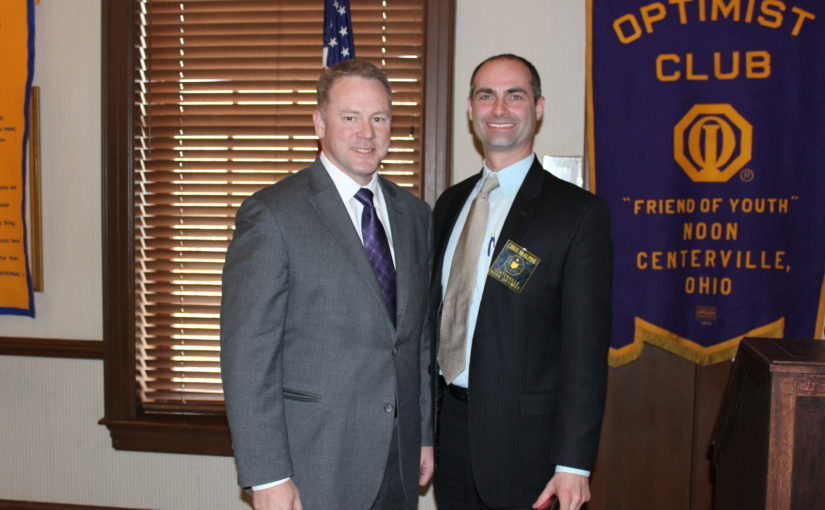 Heavenly Father we are over joyed to welcome You in our midst. You are our spiritual leader, our teacher and our motivator. We pray that we are the extension of Your love here on earth, by being Optimists and caring for Your kids. Be with us in our journey to bring out the best in kids and make this a better world than when we entered it. Help us make You proud For using our talents for the betterment of others. We’re drinking from our
saucer cause our cup of blessings runneth over. Amen!

Jean Pummill spoke to us about how the process works. This is the last of the 3 weeks. Two of the nominees got up and spoke for a short time. Summaries follow:

There were no additional nominations from the floor to run against the board’s recommendations. Therefore, we proceeded to confirm the board by acclamation. The voice vote confirmed the following people are elected to the CNO 2018-2019 Officers and Board of Directors:

Congratulations to all of you.

Tom Novak shared with us what our Avenue of Flags did for the community this week.  Marine Gunnery Sgt. Derik Holley is one of the Marines that died in a helicopter crash in California.  Avenue of flags paid tribute to a fallen serviceman. At every home on Ridings Blvd in Centerville, flags were placed to honor the fallen hero. Pictures of the display are here.

Scott Langer introduced today’s speaker, Warren Davidson, a U.S. Congressman representing the 8th district of Ohio. Born and raised in Ohio, he proudly served in the Army for 12 years.

He explained what the reality is when the news describes congress as being on vacation. This really means you are back in you home district and working there instead of Washington D.C.

He recently voted no to the 2232 page omnibus spending bill. It had several wins for our area especially WPAFB, but there too many things he couldn’t agree with, the biggest being the huge yearly budget deficit that keeps growing out of control. Additionally, the bill continued property seizure actions that he believes to be unconstitutional. The bill passed on 3/23/2018, and the year it applies to ends on 9/30/2018 and the process starts all over again.

He fielded many questions from club members. The rest of this article is based on some of the questions and answers.

In discussing the budget deficit, he mentioned that the theory many have is the U.S. is too big to fail. This may be true, but he pointed out that U.S.S.R essentially did go bankrupt. Now the biggest chunk left of the U.S.S.R, Russia, acts like they are still a big player on the world stage, but economically they are no where near their former place in the world. Unfortunately, they still have a lot of arms. We borrow over a trillion per year. That is more than the 700 Billion the military uses each year. It bothers him that we borrow more than we spend to protect ourselves – if we lost this ability to borrow from essentially enemies how will we defend ourselves?

He hopes someday as a country we find a unified policy on Iran or we’ll be in for another 4 to 5 trillion dollar war.

The Parkland shooting was mentioned. He said that we should govern by law not by emotion. His take on gun control and the second amendment is this: The Constitution and the Bill of Rights do not grant us rights. We inherently have rights. These documents are there to protect our rights. He thinks laws passed to help with school security should be created at a very local level, not even counties should dictate to their entire population, let alone the state. The federal government is providing grants to schools to assist with security. Six states have enacted red flag laws and that seems to help some in being proactive.

The entirety of the spending bill can be read here.