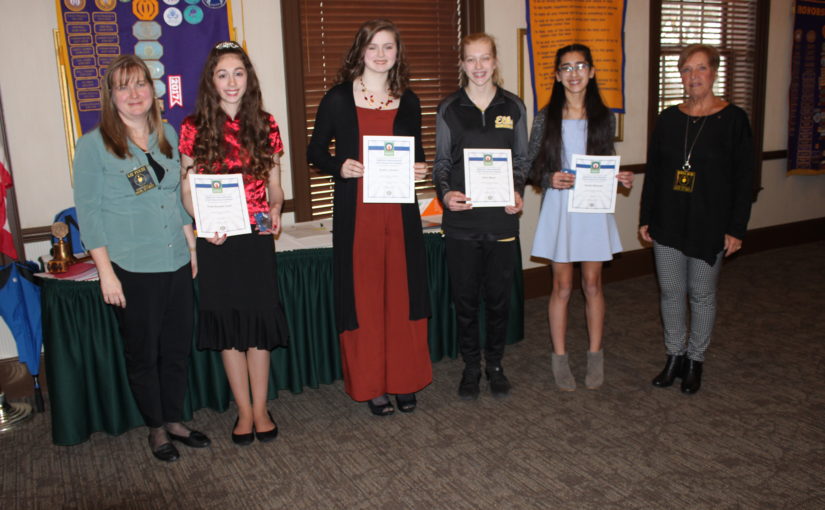 There will be a Wine and Beer tasting event on Saturday, February 23rd, 2019 at Diane and Patrick Arehart’s residence. You can taste wine, beer or both or just come to socialize.  Contact Diane Arehart (dla@arehart.com) or Beth Duncan (beth@lizardap.com) to sign up.

Golf Committee will be meeting on Wednesday, February 20th, 2019 at 6:00 pm at Buckeye Home Care located on Paragon Road.

Childhood Cancer will be meeting on Thursday March 14th, 2019, at 6:30 at the Centerville Panera Bread.

Liz Fultz, the chair of the Oratorical contest, introduced the participating students and described this annual event. This is the third year for Liz to chair this event. She would like to thank the content and timing judges for assisting with the event.

Today we have the second group of participants for the Margaret Barclay Memorial 2019 Optimist Oratorical Contest.  Since it was established in 1928, the Oratorical Contest has become the longest-running program sponsored by Optimists International.  This contest is named in honor of former Optimist member Margaret Barclay who passed away in 2010.   Margaret chaired this committee for many years.  She cared deeply about bringing out the best in kids and in living the Optimist Creed.  She was a most beloved member of our club, a past president and lived a life dedicated to helping others. Margaret Barclay’s accomplishments were vast including 40 years in public education, the last 27 in the Centerville Schools. She retired in 2000 as Principal at Magsig Middle School. It is a pleasure to see her memory continually being recognized in this way.

The Oratorical Contest is done in collaboration with Centerville Evening and South Metro Optimists, who also sponsor contests.  Mr. Roy Barclay, husband of Margaret, supports the contest by making an annual donation.  Thank you, Roy, for your ongoing contributions and support of this contest.

The rules were changed this year by Optimist International to make it co-ed instead of a boy group and a girl group.

The 2019 topic “Is There a Fine Line Between Optimism and Reality?”.

To keep the judging fair, the names of the contestants were kept secret and we were not allowed to applaud the participants until all had presented. All of today’s students were from Centerville schools and were female.

Speaker A went first. She said that optimism and reality are not on opposite sides of the line but are interwoven. “Optimism is the faith that leads to achievement. Nothing can be done without hope and confidence”, a quote from Helen Keller.

If you do the work in school, you will get that A, just being optimistic isn’t enough. Expectations in observing an event can change the perception of an event. Don’t be reckless with your optimism. If you don’t know how to ski, don’t start on the Diamond slope because reality still matters no matter how optimistic you are.

Speaker B was next. Imagine you have a hard head injury in a football game. The coach asks you what your name is and you don’t know it. You have been disconnected from reality. Optimists are fully aware of their reality. Optimists work hard to find nuggets of positivity in a difficult situation. Optimists value positivity and have created habits to stay happy. Sometimes an optimist blocks out the reality. A realist sees the worst in a situation. An optimist will look for ways to improve if they didn’t make it on a team, while a realist will complain about uncontrollable factors for why they didn’t make it.

Speaker C was next. Thomas Edison ignored the line between optimism and reality He ran his electric experiments more than 1000 times before succeeding with the electric light bulb. In the story of David vs Goliath, David’s optimism was important for giving him the strength to stand up against the Goliath with just a slingshot as a weapon.

She said she had practiced dance her entire life. She planned to be a primary dancer with the American Ballet Theater dance company. She had to quit dancing because of a disease she developed in her legs. Being an optimist, she started playing the violin again since she couldn’t dance anymore. She was very far behind the other students who had been in the symphony orchestra for several years already. She stayed optimistic and was able to catch up to the other musicians and play as well as the best players.

God has intertwined the line of optimism and reality, that weaves a beautiful tapestry of life. In conclusion she said abolish the line and make the impossible possible.

Speaker D was our final speaker. When life gives you lemons, make lemonade. Looking on the bright side of life can have a major impact on your life. Optimism can affect your life both physically and mentally. Optimists tend to live a longer, healthier life. Reality can be affected by optimism and make it better.

Being optimistic can change the reality of others around you. Use positivity to achieve goals. You are more likely to achieve goals when you are optimistic. When younger at a gymnastics competition, she was very nervous, but she was optimistic, and she overcame her nerves and took first place.

You must have a sense of reality while being optimistic. You still must try, learn and achieve to reach your goals. Firefighters in California are fighting numerous wild fires. They need both reality and optimism to put the fires out quickly and safely.

The relationship between optimism and reality require that you need to be realistic in your goals.

All four students did a fantastic job in both content and presentation. Only one moves forward and that is speaker D. You are welcome to go see her at the next round of the Oratorical contest at the library in a couple of weeks.

No happy bucks this week.