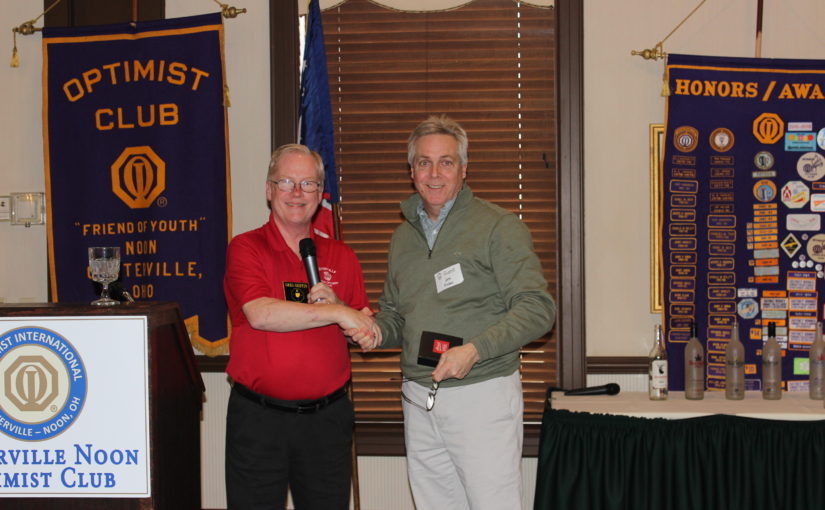 Today was Scott Langer’s Birthday. Bob Duffy led our infamous group of singers. It was an awful sound as always, but it still makes everyone smile. Happy Birthday to Scott Langer!

Jim Fink spoke to us. He said, “Thanks for having him here today.” He asked, “How many have heard of Buckeye Vodka? How many have tried it? How many of you have made it your brand of choice?” Very few answered yes to the last question, so he said, “I need to work harder to increase that number.”

He discussed how the idea of making vodka came about. He was running the 4th generation of a family business called the “Finke Co” which was started in 1886 and has been in Dayton for over 130 years. It was a wholesale non-foods distributor. This business had gotten much smaller and in 2008, they needed to do something else. This was not a good time in the economy. No one was starting a new business. The housing market burst and in December, 2008, GM closed the Moraine assembly plant. In June of 2009, NCR moved 1400 jobs to Georgia. Every family member, friend, neighbor and business owner he knew suffered from the poor economy and those losses.

He and his younger brother in Texas searched for months to find something to buy. The only businesses available were already distressed.

His brother called one day and asked, “What about if we started making vodka?” Alcohol sales is one business that does well in a down economy. They studied the industry and learned that 33% of liquor sales are Vodka. Craft distillers have expanded greatly. Sales of gallon size vodka had increased. People were willing to sacrifice quality for more quantity at the same price. Small craft distillers were a small but growing group. In 2000 there were 12; by 2010 there were 400; today there are 1600 and growing.

They asked themselves if they could make an ultra-premium vodka and sell it under market value.

It all seemed to come together. They would leverage Jim’s experience in distribution and retail merchandising. Additionally, his brother-in-law, Tom Rambasek, owned the Crystal Water Co and it was also hurting because of the economy. They could use this high-quality, distilled water in making their vodka. Plus, Tom had space that could be converted into a distillery.

To keep costs down they developed the company to operate debt free. It is a family business and all 5 of his siblings have shares in the company.

It is very complicated to make and sell spirits in Ohio. They had to hire a lobbyist to help with the state compliance. Ohio controls every aspect of the liquor business. He noted that retail store owners only earn 5% on the sale of liquor. In February, 2010 they met with state liquor control board. The state controls and can also guarantee distribution. They gave them 210 stores which is half of all the stores in the state.

For a great product you want a great name and a great package. The name Buckeye Vodka came up in the first conversation about the name. There was concern that brand name may not sell very well in Michigan.

The wanted their product to be pure, smooth, handcrafted, using the best ingredients. It is to be made with the best water and grains using efficient technology and create a superior quality product. The distilled water is tested to 10 micro ohms which means it is nearly perfectly pure.

Once they decided on a designer and name in April 2010, they found out that Ohio State University wanted to prevent them from using the brand name which cost them 9 months. This eventually worked out. It took 9 months to settle on the bottle design. During this process the governor of Ohio changed which can disrupt the process because all new people come in on the liquor board.

They were finally granted a federal license in February, 2011.

They have just hired Greg Sabatino from Sabatino West advertising agency to do broadcasting and heighten awareness of the brand.

Locally they get some help. They received a lot of publicity from local media such as channel 45 and the Dayton Business Journal.

He said, “We’re looking forward to seeing what the increased awareness will do for sales.”