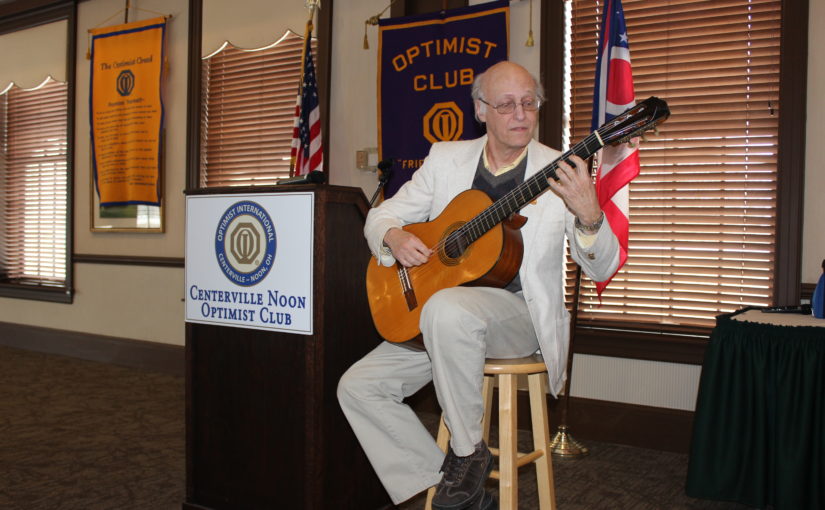 Donna Huss is on vacation. President-elect Greg Griffin was the master of ceremonies for today’s lunch.

Greg Griffin discussed the NOW event from last Thursday 1/17/2019. We gained 5 new members. Also, new members found out more about our club. Thank you to everyone who helped at the NOW event.

Beth Duncan, social committee, announced that there is a Dinner/Euchre party on Saturday, January 26, 2019 at 6PM at Bennett’s Publical Family Sports Grill in Miamisburg. Cost is only $5/person.

Greg Fay announced that Ron Tinnerman has arranged for Janelle Ross to be a speaker soon for Optimist 2.0.

Greg Fay announced the next several CNO 2.0 events. All are from 5:30 PM to approximately 7 PM.

Dick Stevens introduced Jim McCutcheon, who is known as the “Guitar Man”. He owns McCutcheon Music in Centerville on Marco Lane. He started playing the guitar and other instruments when he was 10 years old and he loves them.

Jim shared some of his story and played the guitar for us. He started with a joke. He said, “Hello, I have been Jim McCutcheon for 67 years.”

In his youth he took lessons for 4 years. He went UD to study physics. It was there that he found a private tutor for guitar. The tutor said, “You only have 2 problems. Your left hand and your right hand.” Jim got to study under him for a short time each year for 4 years. He was thankful to find this teacher. He had not improved his playing for several years and this teacher helped him figure out how to get to the next level of playing.

The first song he played for us was “The Entertainer” by Scott Joplin. It was amazing! It sounded like his guitar came alive.

He completed his bachelor’s degree in physics and was accepted into medical school. By now, though, he wasn’t sure if he liked the idea of becoming a doctor more than becoming a musician. His advisor at medical school said, “I’ll give you 2 years to decide what you want to do when you grow up.”

Jim, after college, was playing or practicing music for 65 hours a week. He said, “I lived a life of music. I had more energy at the end of week than he had at the beginning of the week. I truly loved music.”

He was part of a band that was similar in style of the Juthro Tull rock band and they went on tour. Jim played guitar and flute.

He decided to go with music over med school. He became the first graduate with a degree in classical guitar from Wright State University and it was also the first degree of this type in Montgomery County. After graduation, he got a job at Sinclair teaching classical guitar. Eventually, he also received jobs at Wright State and Antioch.

The second song was number one in 1968, which was surprising at the time because there were no lyrics. The song he played was “Classical Gas” by Mason Williams. He got to meet Mason in 1969. Jim really loved how much Mason could do with a guitar. This was also amazing to listen to.

Later, Jim started teaching lessons in his home. His wife was not thrilled with all the students coming into their home. Jim then rented space across from where City Barbecue is. After a few years, he outgrew that space and moved to where he is now on Marco Lane in Centerville.

McCutcheon Music now has 50 teachers and teaches 500 students a week. He has a great staff of 18 people. He keeps expanding into more available space in the building he occupies. He loves the path that his career has taken. When he was younger, he never thought he would own over 500 violins that would be rented out to students.

The last song he played was a famous Spanish song called “Malaguena” by Cuban composer Ernesto Lecuona. It was mesmerizing.

Thank you “Guitar Man” for entertaining us today!