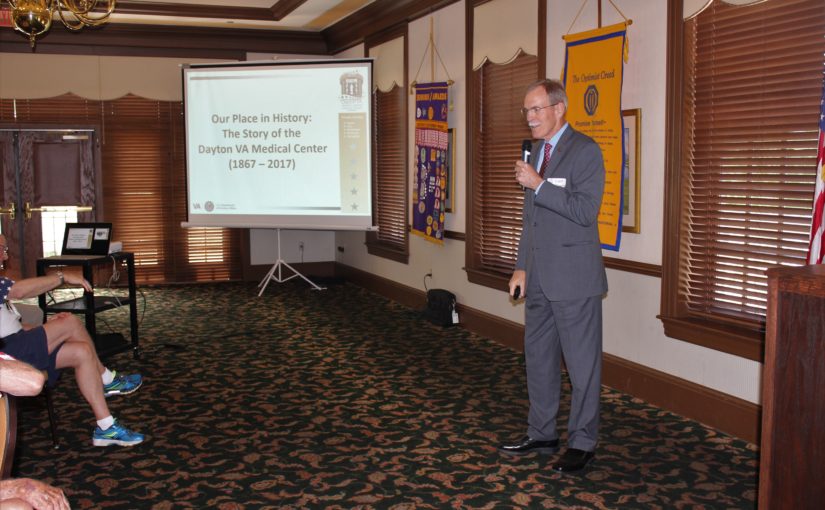 Thank you so much to all of our veterans. A special thank you to all the veterans that are members of the Centerville Noon Optimists and for their continuing effort to benefit others after already giving so much of themselves serving our amazing country, The United States of America!

Joan Cordonnier reminded everyone that July 4th is nearing quickly, so don’t forget to sign up to help or participate in the Americana Festival-5K Race.  The proceeds go to the Centerville Noon Optimists.

Cherie Gentry stated that the OI district convention is August, 17-18, 2018 in Fairborn OH.  The OI international president will be attending and the more of us that show up the better.

Kelly Stone introduced Mary Ryon from JOI. Mary brought 4 girls from JOI to discuss what JOI means to them. CNO donated $2000 so these kids can attend the JOI convention in Ottawa, Canada. There are 8 girls and 1 boy that will be attending. The kids from JOI made a beautiful “thank you” poster and presented to us during lunch today.

Valerie Kronson, current governor said each year she goes to the convention she makes new friends. She gets a lot of new perspectives on life and the life other JOI members from all over. She enjoys discussing service activities with new friends.

Faith Ryon, governor elect stated that JOI means a lot to her because she looks forward to each summer and it makes her happy. She loves travelling and meeting people. She likes being around others with similar thoughts. She enjoys visiting new areas and new people. The workshops are amazing. She appreciates how hard the people running these conventions work.

Karen Havlip, secretary, coined the phrase Floriohio for Florida, Iowa and Ohio. The members of her group of friends come from these three states. She wants to make t-shirts with the name. The Leadership workshops are amazing. The boy from Florida will be making a video of the trip and we can watch it.

Kinzie Baker, a newer member, said thank you so much for making it possible for her to attend her first international convention.

United States Veteran’s services were started during the revolutionary war, however, there was no money to fund the services needed. For all U.S. wars through the Mexican War the states provided Veterans services instead of the federal government. The Mexican War was the inspiration for the opening lines of the Marines’ Hymn, “From the Halls of Montezuma…”. Hardy showed a picture of this epic battle.

The Veterans Administration was not established until 1930 and became the cabinet-level Department of Veterans Affairs in 1989.

The American Civil War made the need for veteran’s services a national need. Huge advances in weaponry occurred at the time of the Civil War. The increase in the number of dead and wounded was well beyond any other U.S. war up to this point. Over 1 million needed treatment, though most from disease. Old war tactics were used, but with amazing weapons. Tens of thousands of disabled veterans resulted from the Civil War.

Artillery canons became much more effective, reaching a 2-mile range. Canister bombs were effective at a 200-yard radius and within 10 yards of explosion victims were vaporized.

Rifle efficiency also increased. The Spencer rifle, the first repeating rifle, was invented. With the Spencer rifle a soldier could shoot 28 rounds per minute. Soldiers described it as, “load it once and shoot all week.” The Confederates also had rifles that were more accurate and used .58 caliber rounds that were very damaging.

The mission of the VA is to fulfill President Lincoln’s promise “To care for him who shall have borne the battle, and for his widow, and his orphan” by serving and honoring the men and women who are America’s Veterans.

Nationally at first 3 VA homes were established. The facilities were located in Dayton. Maine, and Milwaukee. The Dayton VA facility opened in 1867, at first with just a log cabin and a barn. Its first hospital was opened in 1870 and was the most modern hospital ever at that time, having running water, steam heat and flush toilets. It had housing for up to 7000 veterans. The VA hospital was a tourist attraction, having over 500,000 visitors per year. Originally the VA was run like a military organization, with routine and discipline. Residents that could work, worked to feed themselves and others and take care of the facility.