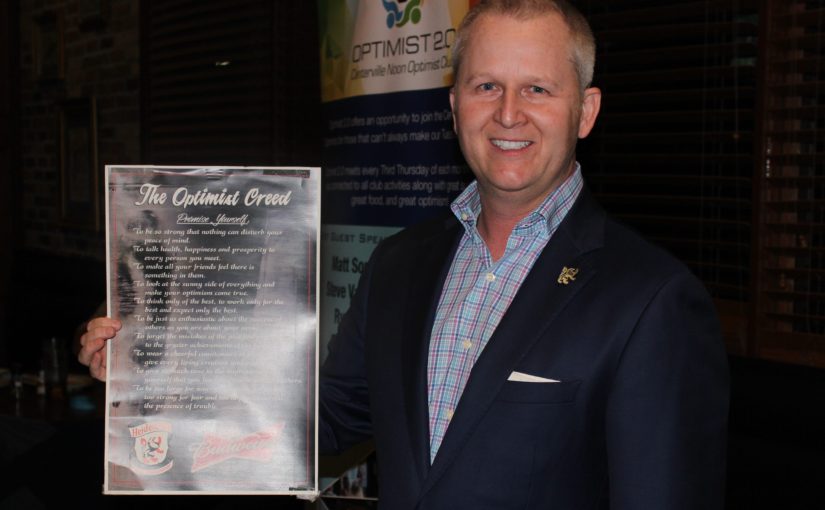 The venue for tonight’s CNO 2.0 meeting was Chappys Social House at 880 Washington Village Drive. Thank you to the team at Chappys for hosting us.

There was a 50/50 drawing won by Ruthy Quinlan.

Nick Tarkany announced tonight that this quarter we are recognizing two outstanding Centerville Elementary School teachers, Sarah Storer from Normandy Elementary and Lauren Delong from Cline Elementary. Teachers are selected by administrators for going above and beyond to help educate the youth in our community. Each received a $25 gift certificates courtesy of Chappys.

Greg Fay, the chair of CNO 2.0, said he was so thankful for all the guests and members that came to tonight’s meeting.

Greg Fay said that CNO 2.0 is a club within a club of the Centerville Noon Optimist club. CNO (and CNO 2.0) is a world class service organization. Being a member of either club allows their members all the same opportunities to participate in fundraising and club activities. CNO 2.0 was created nearly 3 years ago and is very much a part of the 51-year-old Centerville Noon Optimist Club. CNO has given away over $2 million during its history. CNO is a group of like-minded members that are passionate about helping youth and having fun in the process.

Greg Fay introduced tonight’s speaker, Vail Miller Jr., the CEO of Heidelberg Distributing. Born in 1971, Vail Miller Jr. is a native of Kettering. He became the CEO in 2010. The owners of the business are his mother and uncle.

Vail’ wife Leslie Miller and their daughter were able to attend tonight’s meeting.

Heidelberg was started by Vail’s grandfather 80 years ago in 1909 by Albert W. Vontz, a 22-year-old German immigrant, who arrived in Cincinnati in 1907. Vontz’s only son, Albert Vontz Jr, returned from World War II and earned a degree in economics from the University of Cincinnati.

In 1959 Vontz Jr. purchased the Anheuser-Busch branch in Cincinnati for $25,000. In 1961 he purchased the Dayton Budweiser distributorship from another wholesaler. Vontz Jr. passed away in 2002, but not before the company had grown substantially through mergers, acquisitions and industry consolidation.

Miller Jr. started working for the company in 1982 at the age of 12. He took the bus downtown to fill vending machines.

Miller Jr. studied organizational behavior at Miami University. He met his future wife, Leslie, and worked for another distributor in Missouri. Then he went to work for Ernest and Julio Gallo.

Other family members work for Heidelberg as well. Miller Jr.’s sister manages contracts with brands and teamsters. His 7-year younger brother works in sales. Recently, his cousin joined the team.

For 15 years Miller Jr, has had the Optimist Creed hanging in his office. His family follow the creed. Beth Duncan asked if he would fill out an application to join and he did.

Vail uses “Mind Hacking” to constantly improve himself. He is mindful to return calls quickly. He believes respecting who you are engaging with and “Be where your feet are”. He gets at least 3 hours of exercise per week. He makes sure he is showing his enthusiasm for everyone he has contact with.

Their business is about continuous improvement. He believes there is no failure, only results. Remember to be curious. He asks himself and others do we have grit. We are building brands.

It is important to do what is right, and not who is right. He wants to make great decisions each day for their employees and their customers.

He said there is an awesomeness when employees of the company leave and then return to Heidelberg. He did the same and it benefits the employee and the company.

When his kids were young, he traveled 180 days per year. His business is about making friends. It helps that his wife’s family also has a large business and understands the sacrifices necessary for success.

His grandfather loved the community. The company has been a big supporter of the Schuster Center and the Victoria Theater Association.

Vail Miller Jr, his wife Leslie and their children currently live in the house that Miller Jr. was raised in. It had been owned by other families, but he was able to purchase it.

Thank you, Vail Miller Jr., for taking the time to tell us about your experience growing up and working with the Heidelberg company.