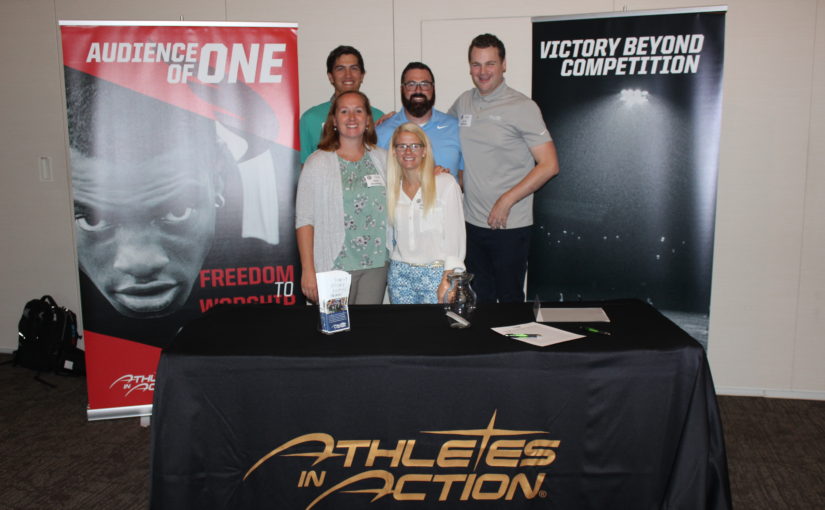 Heavenly Father, it seems all we hear is like when the fellow in New York asking how to get to Carnegie Hall – practice – practice – practice. Yet, how do we get better if we don’t practice. Optimism is a gift. . A gift we should give away or share with another. That’s a practice, we need, to become a better Optimist. We have a fantastic Optimist club. We can only discover how good it is by joining our fellow members in all the activities that bring out the best in kids. We pray that all the old timers will let their enthusiasm rub off on the newbies. It’s a win win situation to the giver and receiver, but especially for the kids. Lord help us join with our members to be givers of Optimism. Amen!

There is no lunch meeting at Yankee Trace on Tuesday, September 24, 2019. The Presidential Installation dinner will be that evening instead.

Thursday, September 19th, 2019, 5:30 PM – 7:00 PM at JD Legends in Franklin OH. The speaker will be Coach Anthony Grant of the University of Dayton Flyers. All members and guests of CNO and CNO 2.0 are always invited so please join us.

Judy DeMarco announced that she is looking for nominations for the Community Champion Award.  Please refer to the CNO website for information about this award designed to recognize people in our community who are champions of children in the community.

Chris McAlpine, chair of Tri-Star soccer held last Friday, announced the event was a massive success. He also announced it was a total catastrophe. He was prepared for 100 participants because there were 50 last year. At least 150 kids showed up this year and we weren’t quite ready to handle that many.

Beth Duncan, social committee chair, said there are 8 spots left for the Keeneland trip on 10/10/2019. Please turn in your checks as soon as possible to guarantee your spot on the bus.

Gail Aiken, Haunted Trail chair, announced the trail will be on October 15, and 16, 2019 at Forest Field park. It is about a 1-mile walk and she needs volunteers to be trail guides.

Greg Griffin, chair of the Christmas Tree Lot, said it is 80 days until the lot opens. They have ordered 975 trees. We expect to sell out in just 2 weeks instead of 3. Please show up for your shifts as the lot will be busier than normal since Thanksgiving is late this year.

Today’s Speakers were from Athletes in Action

Mike Bevis introduced Jared Wellman, the local team leader from the “937” team of Athletes in Action, headquartered in Xenia, Ohio. With Jared today were Leif Moore, Hailey Brumfield Dunn, Joe Owens, and Amy Bromberg. They hope to have disciples on every college sport team in the “937” area code. There are 12 college athletic departments in that area. Athletes in Action was founded in 1966 by Dave Hannah and the sports ministry of Cru Ministries. “Our mission is to build spiritual movements everywhere through the platform of sports so that everyone knows someone who truly follows Jesus.”

Jared Presented a slide show that you can view here.

His first slide said, “Our vision is to see a day when there are Christ-followers on every team, in every sport, in every nation.” It continued, “Our mission is to build spiritual movements everywhere through the platform of sports so that everyone knows someone who truly follows Jesus.”

They are often asked why their mission targets sports. Jared said, “Because sports is a major influence in our culture and many cultures in the world.” He showed us a video showing how sports unites the players and fans. Sports is a common platform that has real influence.

Jared introduced Wright State University student athlete Hailey Brumfield Dunn. She said that she was recently married. Early in her college career she got involved by going to an Athletes in Action meeting.  She is passionate about spreading the word even though she is very introverted and quiet. It has impacted her spiritually and, in her sports, Cross Country and Track. Before joining Athletes in Action, she was having some personal issues and she knew something was missing. Her faith in God has renewed her passion for God and her sport. Hailey said had she not joined them, she may have quit her sports even though she truly loves running.

Hailey was discipled by Amy Bromberg who was also at today’s lunch. Hailey started her own disciple group during her junior year. There are now 12 in her group. She has seen God’s influence with her teammates and athletes from other colleges. She plans to help others start their own discipleships.

Jared next showed us 3 videos. The videos are listed below. One video was of student Mitchell Garrity, from UD Flyers basketball team. Mitchell said that Athletes in Action provided him the resources he needed to succeed. He initially struggled with the pressures of being a college student athlete. Having his faith is something he has been able to rely on.

Joe Owens, Senior Associate Athletics Director – Performance Enhancement, from UD spoke next. He said that students today are thought by older generations to not have grit. He said we should consider that younger people live in a different world than previous generations. Many more students are in therapy for anxiety than in the past. How would previous generations have reacted if they grew up in a world with technology everywhere? He said that entering college is a lousy time to lose your faith. Athletes will listen to other Athletes. He appreciates the efforts of Athletes in Action. Athletes need something that is not shifting and changing.

Jared said they were honored to speak to us today and if you want to get involved or donate, please get in contact with them.

Videos Shown to Us Today