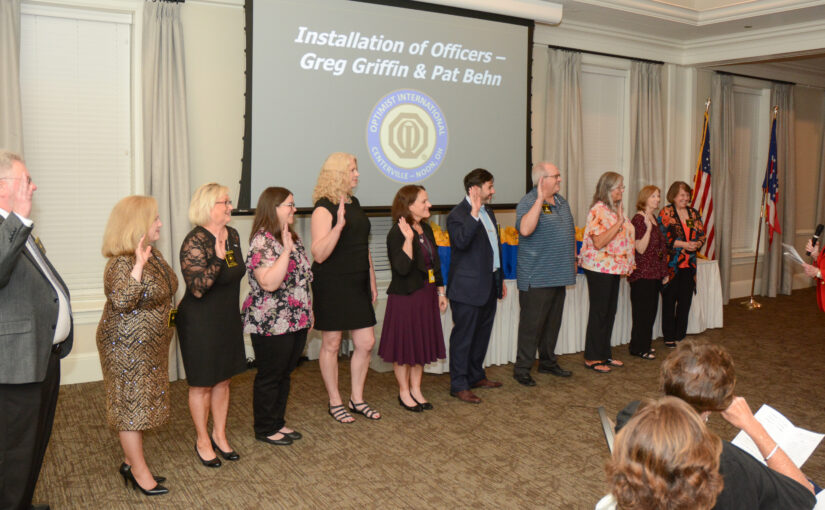 Officer Installation and Awards Program for 2021-2022

On Tuesday, September 28, 2021, there was no lunch meeting. Instead, we had a wonderful evening of feast and fellowship at Yankee Trace. This was a great night to celebrate the past year and to look forward to the next year. This is the end of the Centerville Noon Optimist Presidential year for Debe Dockins. New board members and vice-presidents were installed for 2021-2022. Gary Hansen, CNO president for 2021-2022, was out of town at a funeral and he was installed as president on 10/5/2021 at the lunch meeting. Gary Hansen is the 54th CNO President.

The social committee, co-chaired by Sue Jessee and Sarah Umbreit, put on a great party. The centerpieces looked fantastic. Six lucky attendees found a winning ticket under the seat at the end of the evening and were able to take a centerpiece home.

We started with drinks and appetizers, followed by a buffet. The food was great.

Just like a lunch meeting, we started with a prayer by Phather Phil and proudly recited The Pledge of Allegiance.

Thanks to Gary Smiga, the master of ceremonies for the evening. He did a fantastic job and kept us entertained.

For being president, Debe Dockins received from CNO her Past President pin, a Lifetime OI Membership and pin, and a gavel plaque recognizing her year as CNO president.

Optimist Vs Pessimist, Poem by Unknown read by Gary Smiga

How foolish is the pessimist?
Despondent and forlorn,
Who always when he gets a rose?
Goes hunting for a thorn.

The Optimist has better sense:
The charm of life he knows.
He doesn’t mind a scratch or two
If he can get the rose.

So don’t be a pessimist
Bogged down with discontent:
The Optimist has heaps of fun
That doesn’t cost a cent.

Gary noted that he thought it was appropriate to have a poem written by an unknown artist since President Debe Dockins is a librarian.

Greg Griffin and Pat Behn swore in the new Club Officers and Board of Directors.

I hereby solemnly promise on my honor as an Optimist that I will carry out the duties of the office to which I have been elected to the best of my ability, in loyalty to my Club, and in harmony with the Bylaws of my Club and Optimist International. So help me God.

Passing of the Gavel

After the new board members were sworn in there was the traditional passing of the gavel. Gary Smiga brought up all the previous presidents to form a line at the front of the room in the order they served as CNO president.

The presidents who were here tonight were:

For a complete list of past presidents refer to your Club Handbook.

CNO Rookie of the Year

The 2020-2021 Rookie of the Year was awarded to Julie Rado. Julie hit the ground running when she became a member in March, 2021. She was integral in making the 1st Annual Centerville/Washington Township Got Talent contest a success.

President Debe Dockins handed out gifts to several members with the assistance of Pat Behn. The gifts were given in random order. As Debe handed the gifts she announced some reasons why the gifts were being given to the member. Not all the reasons were captured, and I apologize for leaving anything off.

It is the job of the previous year’s winner (Mike Brubaker) to announce the current year recipients of the Centerville Noon Optimist Thomas P. Frazier Optimist of the Year Awards.

Mike’s presentation was very interesting. He slowly revealed what the winners had done for the club and the community, so the names remained a mystery until they were announced.

The 2020-2021 winners are Evelyn Griffin and Bob Lawson. They each received a plaque commemorating their award.

Evelyn Griffin joined CNO on 10/21/2015 and has participated in multiple events, fundraisers and other volunteer activities:

Bob Lawson joined CNO on 2/17/2016 and has participated in multiple events, fundraisers and other volunteer activities:

A great video Greg Griffin put together of the past year can be viewed here.

After the video was complete, we cheerfully recited the Optimist Creed.

We have had a great night hearing about all the great things we have accomplished.  I leave you with a final thought that it wouldn’t have been possible without each one of you.  Thank you again for your time and commitment that collectively have allowed us to be known as the top performing Optimist Club in all of Optimist International.

The End of One Year and the Beginning of Another

Thanks to President Debe Dockins for all she has done as president in the last year and we look forward to another great year under the leadership of President Gary Hansen, his team and our members!

Link to Pictures Taken This evening

The photos taken by Julie Walling Noeth are here.