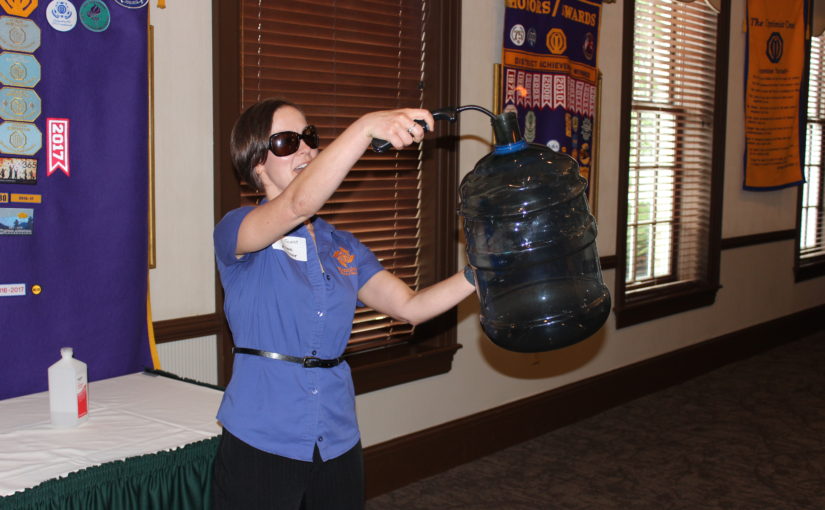 Don Wildenhaus announced that TOP Soccer registration will be August 18, 2019 at 3:00. They need volunteers to help with registration and handing out t-shirts. Centerville Noon Optimist club has been a sponsor for this program for several years. Players and coaches can sign up here.

Jesse Gaither announced that the next CNO 2.0 meeting is on August 15, 2019 and it will be at Heavier than Air Brewing Company and the speaker will be the owner and CNO member Nick Tarkany.

Bob Lawson, chair of the Optimist Kid’s Day in the Park, said it was really busy!. Over 400 kids visited the CNO booth and they gave away over 800 prizes. He thanked everyone who volunteered. Instead of the helium balloons we have given away in the past we offered balloon animals. Several members have now been trained by CNO member Jerry Gerhards on how to make balloon animals.

Beth Duncan announced that signups are now available for the Keeneland Horse Racing event. There is a maximum of 56 people for this event. We last had this event two years ago. Ask others that attended, it was a lot of fun.

Cherie Gentry announced that the Great Ohio Optimist District Convention will be August 15-17, 2019 in Fairborn. Attending is an opportunity to meet, be inspired by and trained by incoming Optimist International President Adrian Elcock. He has a new plan for running Optimist International when he becomes president on October 1, 2019. It is not too late to sign up and the club pays for your attendance fees.

Mike Bevis, golf chair, announced that at lunch on Tuesday, September 17, 2019 we will celebrate the success of this year’s golf outing. Speaking will be Robert Lober,a Pediatric Surgeon from Dayton Children’s Hospital.

Sue Brubaker reported on the Build-A-Bear for children with Sickle cell anemia at the Kroc Center on August 3, 2019, We gave away 80 bears. The kids loved it, it went well and thank you to all the volunteers for your help. We made another 20 bears for nurses at Children’s Hospital to give away to patients having a bad day.

Bob Burkman thanked Erin and Andy Dickerson for representing the Centerville Noon Optimists at the Washington Township Park District’s “Big Back Yard Party” on August 3, 2019. The two of them set up a fishing poll casting booth. CNO normally has a bigger presence at this event, but the Park District moved the date up a month this year and it conflicted with the Optimist Kid’s Day in the Park that was the same day.

Bill Williams introduced today’s speaker Dawn Kirchner, the Vice President of Education at Boonshoft Museum of Discovery. The Boonshoft Museum is a children’s museum, science and technology center and zoo in Dayton, Ohio. It focuses on science and natural history. SunWatch Indian Village and Fort Ancient are the sister sites to the museum.

The slide show she presented is available here

The following is a summary of the presentation written by the presenter, Dawn Kirchner.

Dawn Kirchner, Vice President of Education, holds a Bachelor’s of Science in Biological Science, as well as a Master’s of Science in Biology with a core emphasis in Environmental Science, both from Wright State University. Dawn has been a part of the Boonshoft Museum of Discovery for over eight years, with positions in the Discovery Zoo as well as several positions in the Education Department before taking on her current role in 2015.  Prior to working for the Boonshoft Museum, she worked for the University of Kansas Natural History Museum. Dawn has more than 15 years of experience in the design, management and implementation of a variety of programs, exhibits, and activities for children and adults of all ages in museum settings.

The Boonshoft Museum of Discovery has a variety of programs available for children of all ages, as well as for general visitors to the museum. Starting in 1893 as an annex in the Dayton Metro Library, expanding to the first standalone building in 1953 as the Dayton Museum of Natural History, and then continuing to grow onto DeWeese Parkway and becoming the Boonshoft Museum of Discovery in the 1990’s, the Museum’s collections have soared to approximately 1.8 million items, and continue to grow.