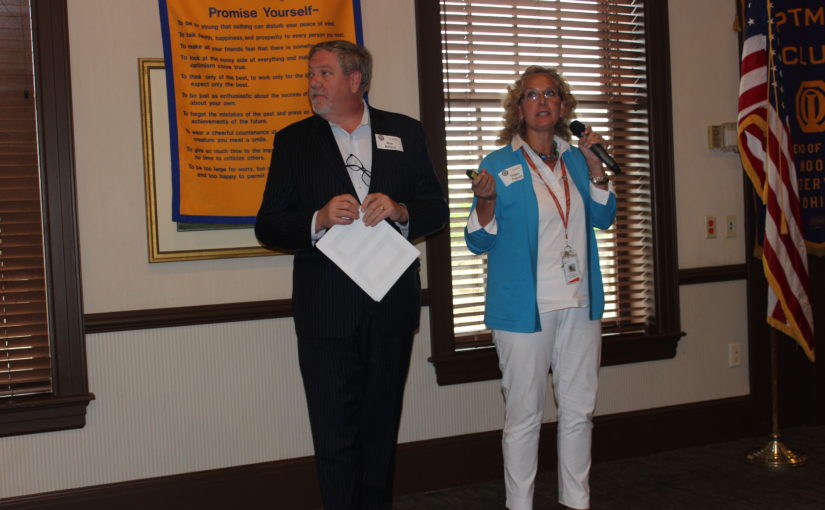 Heavenly Father prayer is a simple way to unlock the door to visit You.
We have so many questions we will never know the answer. Why are
we Optimists? Why us and not our neighbors? Was it in our genes or
did You do Your magic just for us? We could go on and on and be no
closer to an answer so let us just be thankful. This is an exercise we
should do every morning, but be careful. It is said that exercise
makes us look better naked, but so does wine. You better help us
with our choices Lord! Amen!

Gary Smiga announced there will be two openings for the finance committee. Contact the new chair, Roland Rapp, if interested.

Don Wildenhaus announced that TOP Soccer registration will be August 18, 2019 at 3:00. They need volunteers to help with registration and handing out t-shirts. Centerville Noon Optimist club has been a sponsor for this program for several years. Players and coaches can sign up here.

Chris McAlpine announced that Tri-Star Soccer will be held early evening on Friday September 6, 2019. Volunteers are needed to host this fun, annual event.

Beth Duncan recapped the Monte Carlo Night held on August 10, 2019. The big winner of the night was Dick Stevens. The winner of the raffle was Don Kelley. Everyone had a great time.

Donna Huss recapped the St. Leonard  Boomer Fest booth that CNO hosted on August 10th, 2019. We received contact information from 9 individuals who are interested in joining CNO as part of the Optimist Club at St. Leonard. Thanks to everyone who volunteered to work the booth.

Beth Duncan announced that the Keeneland Horse racing event is coming up. There are still several spots open and it is a blast, so sign up.

Donna Huss announced that Beth is going to remain as social committee chair for the next year.

Don Wildenhaus introduced today’s speakers. They are both founding members of TEDxDayton, formed 7 years ago. TED created TEDx as a program of local, self-organized events that brings people together to share a TED-like experience.

Ron Rollins is the Content Director of Community Engagement and Associate Editor at the Cox Media Group of Ohio. He oversees the Ideas and Voices pages for The Dayton Daily News, the Springfield News-Sun, the Middletown Journal and the Hamilton Journal-News.

They took turns discussing the slide show they presented.

What are TED talks?

TED Talk playlists are customizable. For example, Diane said she only subscribes to talks under 6 minutes. A lot of people challenge themselves to watch one TED talk per day.

TEDxDayton takes a lot of effort. You must have a license to host TEDx events. The license are good for one year. Only after reviewing your uploaded edited videos of your event may you get renewed for another year. If you stray outside of the rules, they will advise you to follow the rules. You might get renewed if you broke some rules, but they will let you know where you strayed.

A new TEDx event is limited to 100 attendees until a board member attends a global TED conference. TEDxDayton didn’t have this initial limitation because they were able to have attendees at the global conference before their first local conference.

The idea of starting TEDxDayton was created by Marylyn and Larry Klaben, the owners of Morris Home Furnishings, in January 2013.

Each year there are three TEDxDayton groups

When a local TEDX commits to the Salon format, you must commit to having 3 events. Each Salon event focuses on a singular topic. The first year for the Salon event was 2019. Salons are limited to 200 attendees. Unlike typical events, salons allow for follow up questions and answers.

There is an application process for the Signature Event. TEDxDayton gets about 200 applications per year.  They give first preference to speakers with ties to Dayton (i.e. people who work, are educated, or have lived in Dayton). Of the 200 applicants, 50 are invited to the live auditions. Those selected get a Coach/Mentor. It takes a lot of work over several months. Typically, the minimum about of effort is 100 hours.

What makes a good TED Talk?