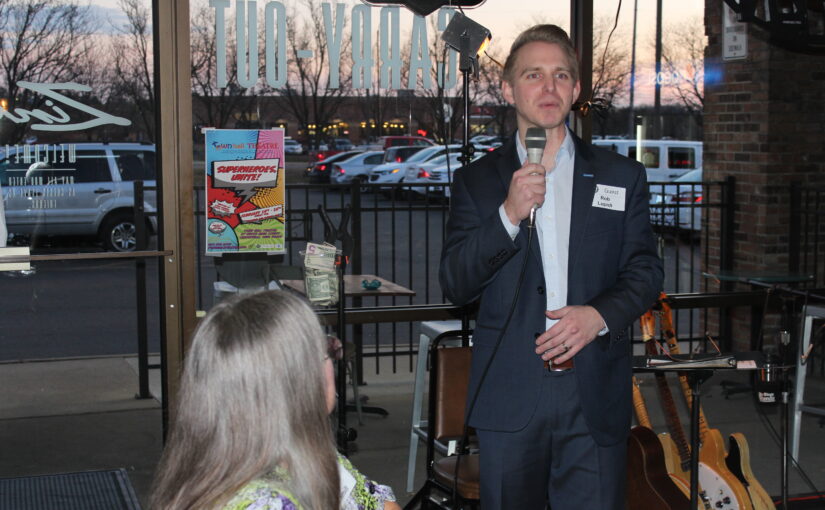 The venue for tonight’s CNO 2.0 meeting was Zinks Meats and Fine Wines at 409 Miamisburg-Centerville Rd, Centerville, Ohio. Thank you to the team at Zinks for the great food and the space.

There was a 50/50 drawing won by James Reinhard.

3/19/2020, 12 PM and 5:30 PM, March Madness at Heavier Than Air Brewing Company. Starting at noon you can enjoy free food and watch basketball games. The regular CNO 2.0 Meeting starts at 5:30 PM. The speaker will be Eric Horstman, the founder and president of Flyin’ to the Hoop. The Flyin’ to the Hoop Invitational is an annual tournament of 38 high school teams played at the James S. Trent Arena in Kettering Ohio. Outstanding teams are invited from all over the U.S. The tournament runs for 4 days each year. It was last played 1/17/2020 to 1/20/2020.

Today was Stan Fronzaglia‘s birthday. All members and guests sang Happy Birthday. It was even in tune! Have a great year Stan!

Greg Griffin inducted two new members to CNO 2.0. Debbie Parks (sponsor Beth Duncan) and Bill Shisler (sponsor Bill Stone). Note that CNO 2.0 members are eligible to participate in anything that a CNO member can, including socials and community events.

Greg Fay introduced tonight’s speaker, Rob Lupidi. Rob has worked 12 years for The Danis Group of Companies. He has a BS in Civil and Environmental Engineering from the University of Cincinnati. He first worked for Danis as a co-op student. After graduation he worked full time for Danis as a Project Engineer for 3 years. He was promoted to Project Manager and performed that duty for 2 years. For the last 3 years he has been the Director of Business Development. For the past 9 years, he has also been involved in recruiting new employees for Danis.

Founded in 1916 by B.G. Danis, the Danis Group of Companies (Danis) is a third generation, privately owned company based in Dayton, Ohio. The company does a lot of high-profile building around Dayton and the U.S. Danis is one of the top 20 builders in the health care industry. They originally built the UD Arena and just finished the renovation of the arena 2 months ago.

Management and Rob knew he was a people person. Without him asking, they appointed him as the Director of Business Development. He is passionate about people and this position was a way for him to shine. He truly enjoys building relationships.

He loves interviewing potential employees. He loves the ones that have a passion for their work, community or hobby. He wants employees that will be happy. Passion drives everything that good employees do. It helps if you care about your workmanship and being on time. Passion gives purpose and a way to find success.

Rob hopes to spend his career at Danis. He likes the company and its attitude. John Danis is the grandson of the founder and has the same great attitude. They want employees to be able to go home each night instead of leaving their families to work jobs far away. They hire good people then get out of their way. The company thinks long term. They provide opportunities for employees to excel.

Rob has noticed recently that a lot of new employees in their industry want to give back to the community. Danis helps employees have time to give back. Every employee is allocated 16 hours a year to volunteer. During their 100-year celebration in 2016, the company started the “Construction Hope Program”.  Through this program the company is currently involved with 40 volunteer organizations and are looking for more ways to be involved in the community.

Rob’s family is large. He is the 8th of 8 children.

Thank Rob Lupidi for sharing your story and passion with us this evening.

Being a member of either club allows their members all the same opportunities to participate in fundraising and club activities. CNO 2.0 started in 2016 and is very much a part of the 51-year-old Centerville Noon Optimist Club. CNO has given away over $2 million during its history. CNO is a group of like-minded members that are passionate about helping youth and having fun in the process.

The Centerville Noon Optimist and its clubs within a club have annual fundraisers and community activities.