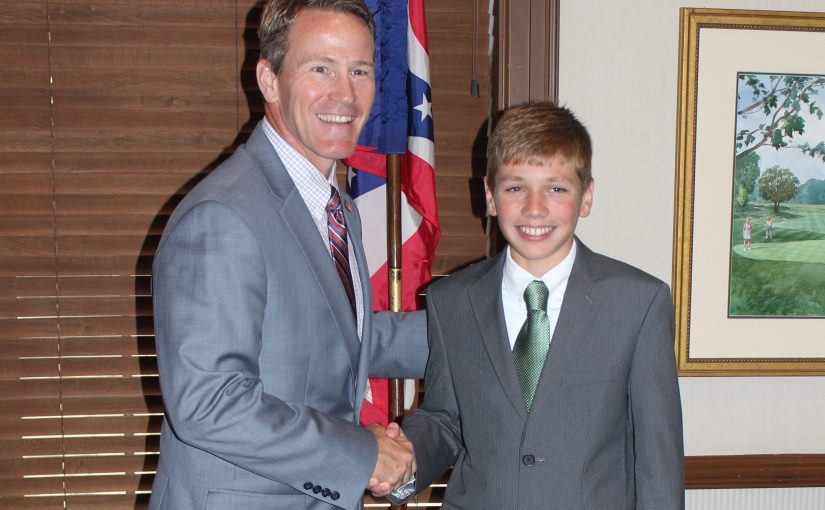 Heavenly Father, when talking to You we need to follow the advise given in the “kiss technique.” As we age we are plagued with momentary lapses in memory. What now are referred to as brain farts. Our brains are going 90
miles an hour but there is no noise connected with it. We thank You for being able to read our thoughts and know what we are trying to say. Younger people need this ability if only to nod their head and smile as if they knew what we were trying to say. So lord help the young  people to have patience and courtesy when confronted with those with brain farts to wait for recovery or at least smile and nod their heads. Amen!

First, Debe Dockins introduced Oratorical contest winner Benjamin Blaumeiser, who will compete in the regional and hopefully national Oratorical competitions. Ben gave us his winning speech on optimism and strength and he was warmly applauded. Debe also introduced Ben’s family, teachers and coaches.

Next, Gary Aiken introduced Ohio Secretary of State, Jon Husted. who spoke to us about the economy, education, and Ohio’s future. Jon worked to lower Ohio’s taxes to attract new industry. He suggested strongly that the education systems in Ohio need to prepare high school graduates to be job or college ready. Jon spoke also about drug addiction problems in our state and how that negatively influences our children and how to alleviate this issue. He also shared his personal story of his having been adopted in infancy by a loving family and his gratitude to his birth mother. Jon was roundly received and applauded.

None this week. (Ashley Morgan will be inducted next week)