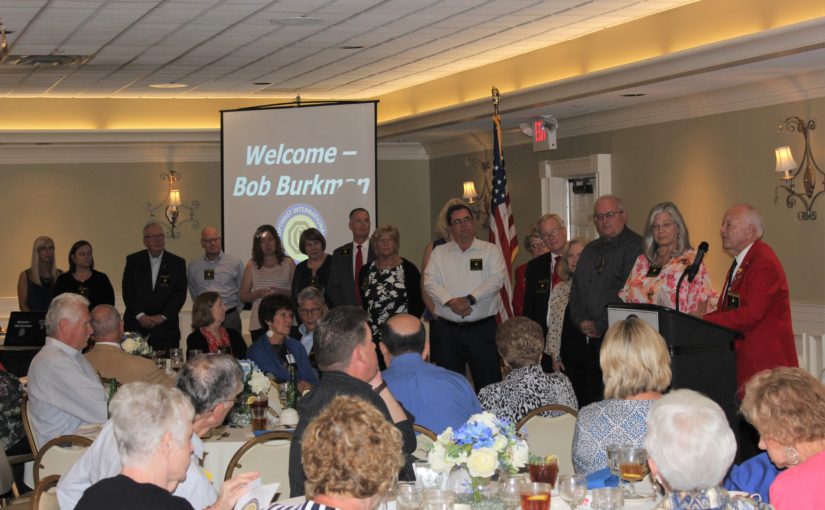 Board and President Installation Dinner for 2019-2020 Year

On Tuesday, September 24, 2018, there was no lunch meeting. Instead we had a wonderful evening of feast and fellowship at The Presidential Banquet Center. This was a great night to celebrate the past year and to look forward to the next year. This is the end of the Centerville Noon Optimist Presidential year for Donna Huss and we welcomed 2019-2020 President Greg Griffin! He is the 52nd CNO President. New board members and vice-presidents were also installed this evening.

The social committee, co-chaired by Beth Duncan and Diane Arehart, put on a great party. The centerpieces looked fantastic and the room just looked coordinated. We started with appetizers then we had food catered by Kohler Catering. The food was great. Just like a lunch meeting, we started with a prayer and proudly recited The Pledge of Allegiance.

Bob Burkman was the Emcee for the evening. Bob did a fantastic job!

This is the night we celebrate the successes of the year. We had another great year. All of our fundraisers were over the top in effort and results. The double bonus of all this has been the great feeling of being blessed by what we do and the relationship we have with one another.

Every year we have had a great leader to carve the way. This year it was the good witch that waved her magic over us and made us feel it was all our idea. Donna Huss rode the horse side saddle when she took over. She did it with grace but had a firm hand on the reins and let’s not forget her humor and her smile. You’ve earned our kudos, Donna, and we are proudly putting you out to pasture. Neighing not a thing you did for the kids and for us. We know you can still cut the mustard. You’re just tired from spreading it around.

Fortunately, we have another rider to lead us onward and upward, Greg Griffin. Greg is a talented Optimist and has all the experience needed. He excelled in all the positions that brought him to this point. May the good Lord bless you and increase your spirit of Optimism for our mission for the kids. May your neighs be nil and far between. Amen!

All Photos from the Evening are Here

Today was Carolyn Taylor’s husband Bill’s birthday. Charlie Tapp graciously volunteered to lead our choir in the painful, non-melodic mess it always is. Based on Bill’s expression and the look of wondering what was happening to his ears, I’m pretty sure Bill had never heard about how this birthday treat goes.

After the completion of the song, Bill said, “You as a group sang better than I do. And if you don’t believe me, ask my wife.” I hope I never hear him sing.

The emcee for tonight was Bob Burkman. He said, “Studies show that Optimists live 18% longer than pessimists. An example of long-lived Optimism is Phather Phil Robinson who will deliver our invocation.”

Next, Bob invited Donna up to tell a joke. She hasn’t had as much time as she would have liked each week to tell a joke, but this one was very funny!

Bob put on some Groucho Marx novelty glasses and said, “The late comedian Groucho Marx once commented ‘I refuse to join any club that would have me as a member.’ Perhaps Groucho would not have cared to join ‘The best Optimist Club in the World’. No great loss. We’ve got Joe Madden”

Bob went over some statistics from Donna’s year

Each of the three major fundraisers have produced record revenues

To date, CNO has contributed over $2 million to our community. Bob said, “It is important to note that none of these accomplishments would be possible without the thousands of hours that you and I volunteer to pull off these fundraisers and conduct our youth activities.”

Bob Burkman introduced incoming Great Ohio District governor, our very own Myron Rheaume. Myron discussed how our club uses its imagination and the “Power of You.” The power of you individually and collectively enables our club to do all the good that it does for the youth of our community.

His slogan as Governor of the Great Ohio District is “Imagine the Power of You!”

Great Ohio District Governor Designate Myron Rheaume and Ohio Zone 14 Lt. Governor Pat Behn swore in and installed the officers and board of directors for the 2019-2020 Optimist year.

Board of director members with one year left in the position are Beth Duncan, Jane Fiehrer, Jesse Gaither and Sarah Umbreit.

Passing of the Gavel and Pinning the New President

After the introduction of the new board members and before inducting Greg Griffin as the 52nd President of CNO, there was the traditional passing of the gavel. Bob brought up all the previous presidents to form a line at the front of the room in the order they served.

The gavel was passed from one previous president to another, ending with Donna Huss passing the gavel to new President Greg Griffin for Optimist year 2019-2020. Then Myron pinned Greg Griffin to officially make him president of our club.

Greg Griffin said, “What an honor it is to be picked as president of the largest Optimist Club in the world out of 2500 clubs.” Greg thanked his wife Evelyn Griffin for all the help and support. Greg told us what he told Chuck Dickerson when Chuck was very sick, “You know when you get to heaven you will be shown every kid that you have helped.” Greg has a slogan for his year, “Live the WOW life”. WOW is an acronym for “Why Optimism Works.” He said, “We think optimistically and encourage kids to think optimistically.” We need to think even bigger than we already do.  Greg said, “Thank you all. You, the members, are the stars.”

Greg’s first official act was to present a check to Hannah’s Treasure Chest. He presented a ceremonial check for $5100. The actual check was given during the summer as it was needed immediately to help after the 2019 Memorial Day tornados. The Interim Executive Director, Dr. Stuart Merl accepted the check on behalf of Hannah’s Treasure Chest. Their mission is to enrich children and he said clubs like ours are truly working together for similar purposes. Part of HTC’s mission is to help alleviate poverty in our community.

Over the course of a year they help over 5000 children. One in three families in our area needs help. Money goes for purchasing diapers, car seats and cribs. Statistics show that children who don’t have to live in poverty lead better lives as adults.

Next, Donna Huss took the microphone. She told some masterful jokes. She thanked her husband, Ray Huss, for putting up with her extra duties for the last year.

The outgoing president gets to choose recipients of the “Rookie of the Year Award”. Donna chose Carolyn Taylor and Andy Dickerson. To earn this award in your first year as a member, you must participate on a committee, a community activity and sponsor a new member.

Next, she gave a Presidents Citation award to Gary Smiga who has been the CNO club treasurer since 2010 and is now retiring from this post. Roland Rapp is taking over for the 2019-2020 year.

The recipient of the Optimist of the Year award is Beth Duncan. Beth was given this award a week early since she should could not attend tonight’s celebration. Donna read the beautiful thank you note Beth sent to her thanking everyone for the honor of being chosen as Optimist of the Year.

Next, Donna Huss recognized her board of directors and officers. She thanked them with some gifts as gratitude for their help with her year as president.

Donna also recognized and presented gifts to all committee chairs and co-chairs.

Donna gave special recognition to Mike Bevis for helping her with building the St Leonard Club.

Donna also had a special presentation for 2019-2020 president, Greg Griffin.

In closing, Donna said there is current song out there called, “Hey Look Ma I Made It.” It inspired her to say, “Look ma I didn’t destroy the club!”

After Donna was done, Greg Griffin showed a video he produced as a tribute to Donna. The background music was the song “Donna” by Ritchie Valens. It was a great tribute and the perfect song.

After the video, Myron Rheaume said, “But wait, there’s more.” He presented Donna a plaque for outstanding leadership. He also presented her with a lifetime membership to Optimist International.

Bob Burkman’s closing remark was a quote from Groucho Marx. “I, not events, have the power to make me happy or unhappy today. I can choose which it shall be. Yesterday is dead, tomorrow hasn’t arrived yet. I have just one day, today, and I’m going to be happy in it.”

Then we cheerfully recited the Optimist Creed.

It was a great evening. Thank you to everyone who made it great. Thanks to everyone in our club that makes it possible to do the good we do. Thank you, Donna Huss, and we look forward to another great year under the leadership of Greg Griffin, his team and our members!