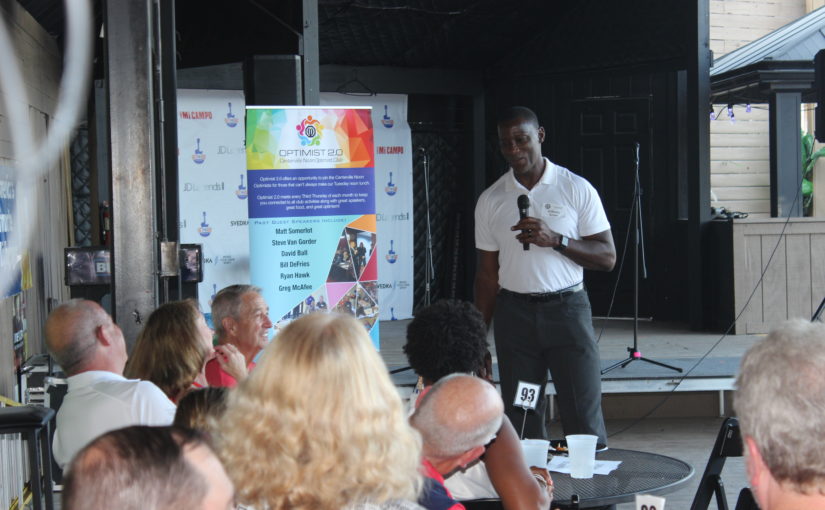 Tonight’s CNO 2.0 meeting was hosted by CNO member Wasfi Samaan at his establishment, JD Legends Entertainment complex, located 65 Millard Drive, Franklin OH. Thank you to the team at JD Legends for hosting us.

There was a 50/50 drawing won by Stan Fronzaglia.

Greg Fay said that CNO 2.0 is a club within a club of the Centerville Noon Optimist club. We are a world class service organization. Being a member of either club allows their members all the same opportunities to participate in fundraising and club activities. CNO 2.0 was created nearly 3 years ago and is very much a part of the 51-year-old Centerville Noon Optimist Club. CNO has given away over $2 million during its history. CNO is a group of like-minded members that are passionate about helping youth and having fun in the process.

Future meetings will be at Old Scratch Pizza in October or November and at Zink’s again soon.

Denise O’Neil, chair of the Haunted trail event, said that the Haunted Trail event will be at Forest Field Park on 10/15/2019 and 10/16/2019. It is about a 1-mile walk and we need more volunteers for trail guides. There are also other volunteers needed to help with parking, refreshments and many other activities to pull this event off.

Coach Grant thanked us for having him here to speak today. He said he was asked to talk about the path his life took to get to where he is now as head coach of UD’s Basketball team since 2017.

Anthony graduated from Miami Senior High School in Miami, Florida in 1983. At the age of 17, Anthony somehow convinced his parents he would be well taken care of in Dayton while attending the University of Dayton. This was not simple because they valued education way more than sports. He was a business major at UD. Don Donoher was his coach at UD and Anthony knows coach Donoher has been there for him.

Coach Grant tells his players that education is the most important thing. He said, “Eventually the ball stops bouncing.”

After graduating from UD, he played semi-pro basketball for a while. Soon, he got a call from a friend to be an assistant coach for JV at his former H.S., Miami Senior High School.

He liked the opportunity to coach because it was a way to still stay involved in basketball and see kids benefit from playing. For a lot of kids their best chance to succeed in school was to learn structure and discipline and to dream. His aim is to show them what a difference college can make to their future. He enjoys making a difference in their lives.

He coached at his high school until he was 26. He left when he was offered a head coach at another local high school. He credits numerous relationships for creating the paths he has taken to get coaching opportunities.

He was assistant to Billy Donovan at the University of Florida for 10 years. The Gators won the 2006 NCAA title.

His first college head coach opportunity was a at VCU for 3 years. Then he was head coach at Alabama for 6 years. After that ended, he and his family had resolved to move back to Gainesville. Before they moved though, he got an opportunity to be assistant coach for the Oklahoma City Thunder.

After hearing that Archie Miller left UD in 2017, he had not thought at all about being the new coach. However, he got a phone call from Neil Sullivan, the UD Director of Athletics, to discuss the possibility. After a couple more days he was offered the job. Anthony had concerns that too much of the reason he was being offered the job was for being a UD Alumni. He asked Neil to be sure they were basing their decision on what is best for the Flyers, not what is best for himself. Neil assured Anthony that he is the best choice.

Anthony said he has seen many areas of our country. He says what we have here in Dayton is truly special. The Dayton fans are the difference he said.

He discussed sporting events. He said at the end of the day, winning matters. He said, “Everyone wants to win.” Beyond winning though sports are important for the community. It is something that gets people to come together. There is joy in watching a kid see a game for the first time.

Sporting events can be a great escape. Watching a game can distract you for a few hours from having to deal with issues you might be having. He tells his players that they are making a difference in people’s lives.

At UD this coming season, Anthony said that there are 11 players who are on scholarship at UD. He thinks they now have some depth. They have the option to have 13 scholarship players, but they made a conscience choice to only have 11. He said it is hard to play more than 11 guys and it is also difficult to keep 11 guys happy, let alone 13.

Practice will start on October 1, 2019. Before October 1st, players are limited to 8 hours per week. They spend an hour a day for 4 days a week in the weight room and they also spend 2 hours for 2 days a week on the court.

Anthony and Christina’s two oldest children are currently students at UD. His family is happy here and he plans to stay with UD for quite a while.

He said that team culture is very important. If you have a great game plan it won’t work if the culture is not right. There must be integrity, commitment, and teamwork for a team to succeed.

Anthony’s goal is to have championship caliber teams. It is important to get into the NCAA tournament as often as possible. The more times you are in it, the better the chance of winning it. You just might get the right matchups and the right games and win it.

He was asked who the team captains will be this year. He said the guys get to vote on this.

Anthony said the players know what the standards are and what we want to achieve. All the players must sacrifice and realize they are better when working together. Good teams become great teams when the players do what the coach requests which can mean giving up court time.

He noted that this year is the only year he will have this team. Every year the team needs dynamic changes, so adjustments are made every season.

Jack Anderson asked coach Grant which players were the most difficult to deal with as their coach. Anthony said some players came to mind, but he declined to share those thoughts.

After Anthony was done, Bill Stone spoke again and thanked Anthony for the great talk and for taking the time. Bill also said that after 3 years of construction, the newly remodeled University of Dayton Stadium will be rededicated on November 9, 2019. It is the 50th anniversary of the UD Stadium.