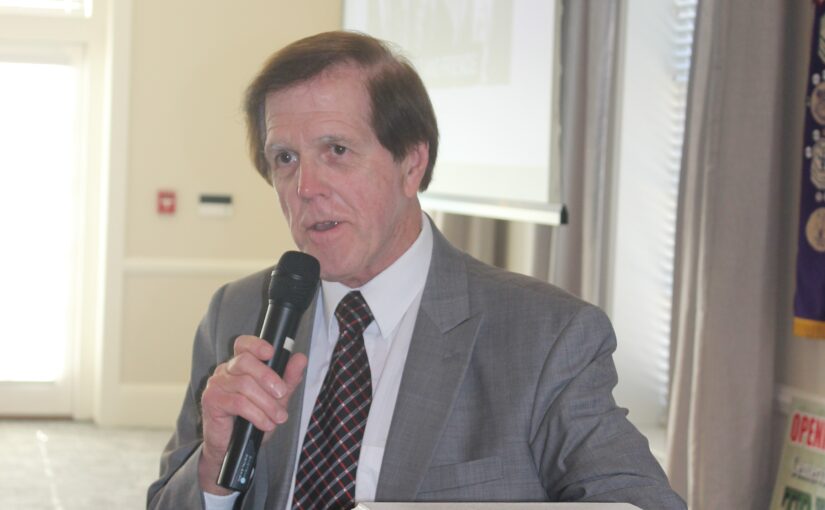 Marcus Aurelius is credited with saying, “When you arise in the morning, think of what a precious privilege it is to be alive, to breathe, to think, to enjoy, to love.” Lord, as we approach Thanksgiving, the beginning of Hanukkah, and the start of the Advent season, help us not to become so overwhelmed or wrapped up in the busyness of this time of year that we fail to notice the multitude of blessings surrounding us.  Let us give You thanks God, not only for momentous events in our lives, but let us also give You gratitude for the simple blessings in each and every day.

Debe Dockins introduced Bill Nance, a long time Miami Valley Radio and TV broadcaster. Nance has worked in local broadcasting for more than 53 years. During his 15 years at WING radio he received more than 50 awards for journalistic broadcast excellence. He was inducted into the Dayton Area Broadcasters Hall of Fame in 2007. Bill and his wife Carol reside in Bellbrook, Ohio. They have two grown children and seven grandchildren. Today, Bill shared some highlights of those 53 years.

You can view the slide deck “From the Microphone of Bill Nance, From Disc to Digital” here.

With Nance today at lunch was Melody Morris, his colleague for decades and co-founder of Faith and Friends Radio.com.

Nance served three separate stints at WING. After first starting in 1968, he left for a short time to work at WAVI-WDAO. Then in 1969. he returned to WING for two years and worked in the Continuity Department, writing and helping to produce commercials. Next, Nance spent five years in Xenia at WGIC hosting a morning show and it was there that he reported on the Xenia tornadoes. In 1976, he went back to WING and reported news for 13 years.

Nance produced several documentaries and special reports. He dabbled in TV a little bit including filling in for Joe Smith on Clubhouse 22 in the 1970’s.

How Bill Nance Got Started in Broadcasting

Bill Nance attended second and third grade in the same building where the Wright Brothers went to High School.

In the early 1960’s, Nance was hit by a car and nearly bled to death. If his mother took him home from the hospital the same day he was brought in, he would have died. God was watching over him. His mother insisted there was more wrong with him than the doctors realized. While in the hospital he had a transistor radio and he tuned to Top 40 Station WING. He heard the songs “Let’s Get Together” by Hayley Mills from the hit movie “The Parent Trap” and the theme song to the TV show, “My Three Sons.” It was then he realized he wanted to be a disc jockey.

At age 14, he and a friend built a one tenth watt transmitter radio station called WIBI, Radio 102, in the basement of his friend’s home. There were electric trolley lines above his friend’s home. Because of the trolley lines the station could be heard for miles as long as you weren’t very far from the lines. They were not legally allowed to have more than one tenth of a watt of power.

Nance learned radio by doing. In high school at Patterson Co-Op, he spent 3 years at a Junior Achievement radio station.

As a high school senior, Nance interviewed with two radio stations. On April 18, 1968 James Bennet from Wing Radio 1410 offered him a job first and he took it. It was here that he met his mentors and friends, Gene Berry. Bob Braun and Steve Kirk. As the youngest and most recent hire, they did not always use him on the radio. Often, they dressed him up in costumes for various promotions. One of those times was as a lion that Steve Kirk wrestled.

Bill Nance worked as program director for 22 years at WFCJ where he started his long work relationship that exists today with co-host Melody Morris. They did a roller coaster promotion for the Millennium Force coaster at Cedar Point by recording his screams. Melody loved roller coasters, Nance did not!

Another time a magician juggled real daggers over him while he lay on the ground for 10 seconds. Melody was asking him questions during the act. It was only after the event that he realized the daggers were real and not props.

Bill Nance, along with longtime colleague Melody Morris, are the co-founders of listener supported, internet radio station Faith and Friends Radio.com. The station harnesses the world’s technology. As of 6 years ago, they have been heard in all 196 countries in the world. They are community focused and have a global reach.

FaithandFriendsRadio.com launched on May 16, 2011. Their slogan is, “Music that hits the heart.” In 2014, Faith and Friends Radio became the first Internet-based radio station to be accepted on the iHeart Radio Network platform. By 2015, industry analysts found that more people listen to radio online than listen through a standard radio receiver, proving accurate the forward thinking of those who so diligently worked to establish Faith and Friends Radio.

About Faith and Friends Radio

Ways to Listen to Faith and Friends Radio

You can listen to Faith and Friends on numerous devices including SmartPhones, Computers and internet connected devices such as Amazon Echo, Apple HomePod and Google Home.

Friends and Family Radio is carried on iHeart Radio at http://www.iheart.com/live/6650/ and on iTunes at https://ffradio.streamon.fm/listen.m3u .

There is also a link on their website that links to https://ffradio.streamon.fm/.

Thank you, Bill Nance, for talking about your career and your current work at Faith and Friends Radio.com.

Thanks to all CNO members for helping with one of our very successful fundraisers. We cannot do it without the generous time of our members.

No Happy Bucks this week.