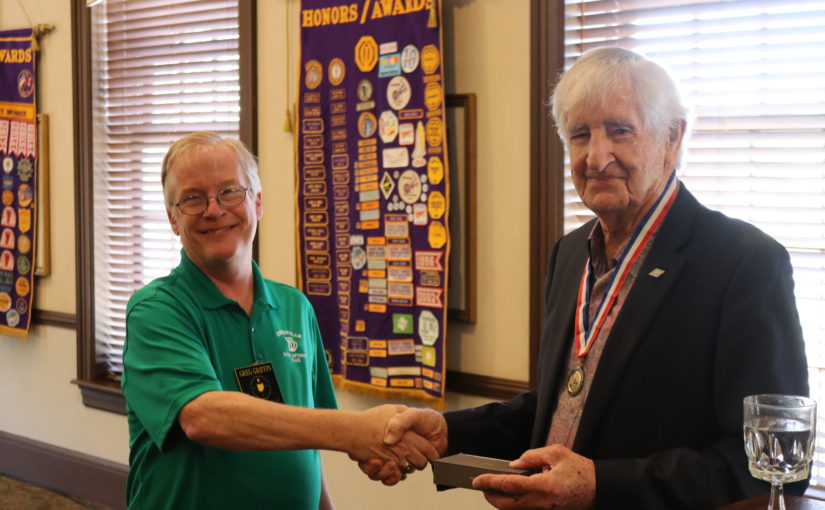 Heavenly Father, thank you for the blessings of the Optimist spirit. A blessing not just for our self’s, but for those who join us in showcasing Optimism and a helping hand to youth. Let us also be mindful of those who need to know You better. May we show the same enthusiasm for our love for You , so that more will adopt Your loving ways. Thereby enjoying a life of peace and harmony with others as well as within themselves. Amen!

11/14/2019, Build-A-Bear for Oncology patients will be at Children’s Hospital. More volunteers are always welcome. Contact Nancy Lehren, the chair of Child Health and Wellness.

Nancy Lehren, chair of Child Health and Wellness, announced that CNO received a $1000 grant from Optimist International for Build-A-Bear.

Laurie Poeppelman, chair of Optigear, said that she and Evelyn Griffin will be taking orders for the next 2 weeks. They have Micro Fleece garments available. You can choose the CNO or CNO 2.0 logo.

Greg Fay announced that the last 2.0 of the year will be at Chappy’s Social House in Centerville on November 21, 2019 at 5:30 PM. The speaker will be Vail Miller from Heidelberg Distributing.

Don Wildenhaus reported about the recent banquet for TOPSoccer. There were 150 players at the banquet. There were 7 teams, and this was the 22nd year. There are 300 players total.  It was scheduled for 4:30 PM, but some kids arrived at 3:30PM because they were so excited. The Centerville Noon Optimist Club has been a sponsor for this program for several years.

From a bio found on the internet:Ralph Young was born in central Kentucky in 1925 and was raised on a farm in Lincoln County. He served as a Gunner’s Mate on the USS J Franklin Bell for nearly 3 years during WWII.

After military service he obtained an engineering degree from the University of Kentucky. He was involved in developing electric power systems all over the USA as well as the Middle East and Southeast Asia. He retired to his place of birth in Kentucky 3 times before really calling it over from an active engineering career to become an author and write 2 books: The Power of a Mothers Prayer and Forgotten Warriors.

In 2006 he was inducted into the University of Kentucky, College of Engineering Hall of Distinction.

One of his electric systems projects was in Saudi Arabia. At the King’s request, he was instrumental in the success of the King’s consolidated power project.

He thanked us for inviting him to come and speak to us today. His wife Janice Young was able to attend as his guest today as well. Before he started his presentation, in honor of veteran’s day he had all the veteran’s at today’s lunch stand up. It is awesome how many veteran’s give of their time and resources to help the Centerville Noon Optimist Club help the youth of our community.

Ralph presented a slide show he created titled, “World War II: The War in the Pacific”. There are many more slides and stories in his slide deck than are reported here.

He said that D-Day’s 75th anniversary rightly received a huge worldwide commemoration, but just 9 days after D-Day was the 75th anniversary of the Battle of Saipan. This battle was just as important and there were twice the number of casualties. Here is an article from the Saipan Tribune about the commemorating of the battle of 71,000 U.S. Marines and soldiers who landed on the island and to remember the nearly 3500 killed and more than 10,000 wounded.

He made a commitment to himself to write a book about forgotten warriors. “Forgotten Warriors: The Amphibious March Across the Pacific During World War II” was published in 2016 and a second revision will be released in time for Christmas 2019. There were 16 million American WWII soldiers. At the end of 2018 there were 496,777 still living. If he has it his way, Ralph said he plans to be the last man standing.

During World War II, Japanese soldiers were trained to die for their emperor. For the WWII War in the Pacific the weather was the third enemy. The weather killed as many soldiers as did the Japanese.

After Pearl Harbor, Japan had a huge area of land to protect after they attacked. Their pilots were well trained, and their planes were very effective. Japan had 400,000 soldiers trained with another 800,000 on standby.

Worldwide there were 96 million casualties. The war in Europe and the Pacific were very different. Soldiers were five times more likely to be killed while fighting in the Pacific than in Europe. In Europe, only 1% of POW’s died while captive. In the Pacific, 40% of them died.

Ralph said there were many acts of extreme bravery during WWII, more than you can imagine. He showed a picture of Marine Richard Kraus from WWII. During a horrific battle, Kraus and 3 other guys volunteered for stretcher duty to retrieve a wounded soldier. During the trip the enemy threw a grenade at the four of them. Kraus gave his life to save the others by throwing himself on the grenade.

He said the turning point in the war was at Midway. He showed a picture of George Gay, who was not awarded a Medal of Honor but was a hero just the same. He was gunned down over the ocean and survived by hiding under his seat cushion from the plane for 30 hours. He went on to become a TWA pilot for 30 years. After his death, Gay’s ashes were spread over the water at Midway.

The story of Thomas A. Baker from Troy, New York is another example of bravery. He was injured badly during a battle and he knew he was going to die. Baker had a medic prop him against a tree with a pistol.   When the medic found Baker later, he and 8 enemy soldiers around him were dead.

There was a slide about Desmond Doss, a conscientious objector who still wanted to help and became a combat medic. He was twice awarded the Bronze Star Medal for actions in Guam and the Philippines. He refused to carry a gun. He saved 75 men at the battel of Okinawa by lowering wounded soldiers one by one down a cliff. He is the only conscientious objector to receive the Medal of Honor for his actions during WWII. There is a 2016 movie about him and the battle called Hacksaw Ridge.

Ralph said that Saipan is now an affordable paradise vacation destination for the Japanese. Everything is way too expensive on the mainland of Japan. Ralph and others visited Saipan in December of 2017. Locals found out who he was and there was an award ceremony for valor in the Pacific during WWII and he was given a medal. He said they were treated like royalty for saving their island. Everywhere they went there were hugs and kisses from the local Chamorros, who were mistreated by the Japanese during the war.

Runway Able on the island of Tinian could be the most historical airstrip on Earth. The battle on Tinian started on 7/24/1944, and 8 days later 8000 of the 8800 Japanese troops were dead. The next year the island of Tinian made history when 2 planes took off from Runway Able carrying nuclear weapons that were dropped on Hiroshima and Nagasaki.

The war in the Pacific ended with the horrific killing of 120,000 in Hiroshima and Nagasaki. Ralph said that using the nuclear bomb on those two cities saved an estimated 500,000 American lives. Just 16 hours after the second bomb hit Nagasaki, the Emperor of Japan, without consulting anyone, decided to end the war. Remember that before these weapons were used surrendering was not an option for the Japanese. The A-Bomb brought Japan out of the barbaric society.

Ralph has two passions in life. Engineering and telling the world about what his fellow soldiers did to win the war in the Pacific.

He has had the most fantastic life anyone could hope for. During the war his mother constantly prayed for him. He has felt protected by God his whole life.

Thank you, D. Ralph Young, for sharing your stories with us today. It was a great presentation and so wonderful to have you speak to us just before Veteran’s Day.

Thank You Notes Sent to CNO

You can read recent thank you notes here.