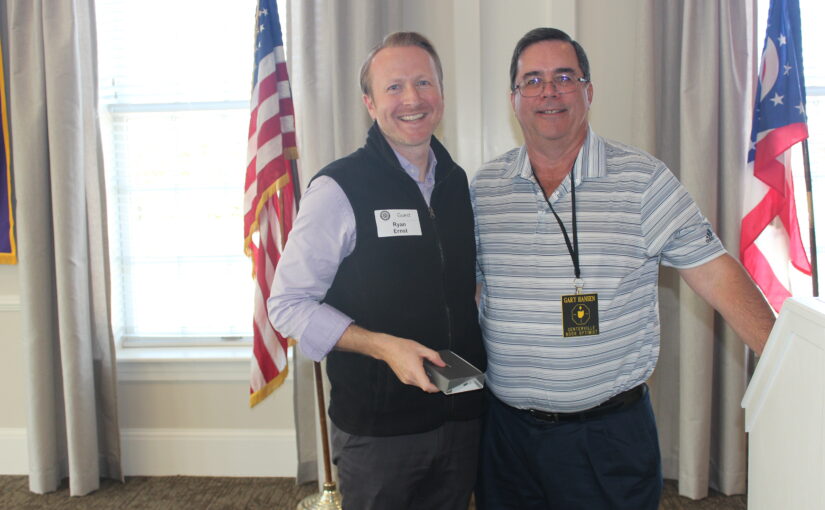 Today was Greg Griffin’s Birthday! He and Evelyn brought a cupcake for everyone at lunch today. Bob Duffy led us in singing Happy Birthday to Greg. The singing was both awful and great. The more we sing it the worse it sounds! Have a great year, Greg! Greg is currently the Governor of the Great Ohio District of Optimist International.

Debe Dockins introduced Ryan Ernst, the director of The Connor Group Kids & Community Partners (CGKCP), which is the non-profit arm of The Connor Group, a real estate investment firm. Over the next decade the organization plans to invest roughly $400 million in programs it believes will pull kids out of generational poverty. CGKCP also starts non-profit programs of its own, including a Bellbrook-based program for young adults with special needs, a summer camp for inner-city youth and the state’s first private non-religious school exclusively for under-served students. Before joining The Connor Group in 2011, Ryan was a sportswriter.

Ryan thanked us for inviting him to speak to CNO today. His organization finds a niche and tries to fill it. They are big investors in kids in Dayton and other districts. They are long time investors in Dayton City Schools.

CGKCP will start the Greater Dayton School next year and will start with grades pre-K-3rd. The first year the new building will not be completed so they will occupy a building in downtown Dayton. The intent is to eventually serve pre-K-8th grade.

Candidates for the school will be selected from families at or below 130% of the federal poverty guidelines that are Medicaid eligible. They are still figuring out the baseline for the school. They want kids with parents that want something better for their kids and that will be involved in their kids’ education.

They will look for a cross section of kids to select. No more than 40% of students will come from Dayton Public Schools. They will also look for candidates in some of the low performing charter schools in the area.

The Greater Dayton School model is the first one in Ohio and among just a few in the nation. CGKCP has studied other schools with similar models.

You can view Ryan’s slide deck here. It includes design plan pictures and maps not included in this article.

Goals to achieve by Age 27

They will have a world-class innovative curriculum. The long-term approach will be that as the students become adults they achieve the following:

Reasons to Locate at Deeds Point

Thank you, Ryan Ernst, for joining us to talk about the plans for the Greater Dayton School.