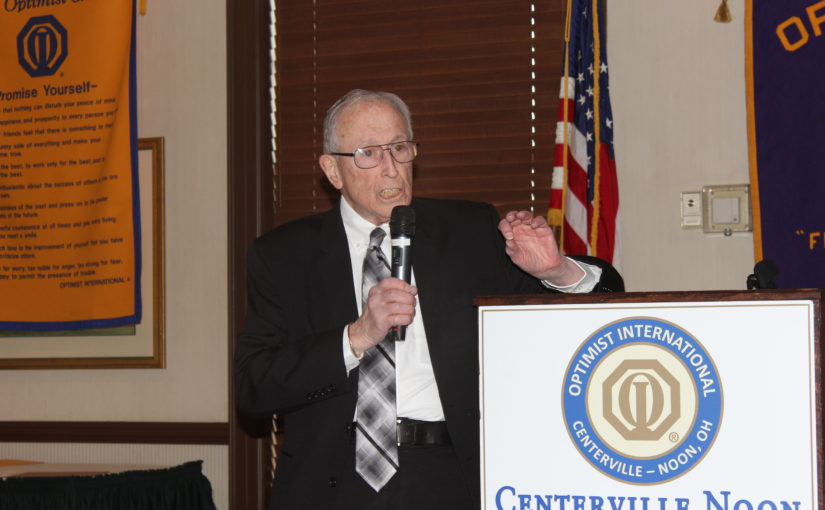 Click here to read Phather Phil’s Thanksgiving Poem that he read at lunch this week.

A Blueprint for Reducing Recidivism by Judge Walter H. Rice

Donna Huss introduced federal Judge Walter H. Rice. She said his reputation precedes him, so he needs no introduction.

His biographical sketch from the Southern District Court Website is here.

His Wikipedia entry is here.

From the above two links:

On June 4, 1980, Judge Rice was sworn in as Judge of the United States District Court for the Southern District of Ohio, at Dayton, having been appointed to that position by President Carter. On December 13, 2018, President Donald Trump signed legislation naming the federal building in Dayton the Walter H. Rice Federal Building and United States Courthouse. On September 6, 2019, The Walter H. Rice Federal Building and U.S. Courthouse was officially named at a ceremony, with Rice calling the event and the building’s naming “the honor of a lifetime.”

Rice is a fantastic, funny and interesting speaker.

Rice said, “I have an hour-long speech prepared. The good news is I left it at the office. The bad news is that I have memorized it.” For the record, the speech lasted about 23 minutes.

He said, “I was going to thank everyone for the introduction, but since it was short, I will not.”

You can read a document he wrote along with Debbie A. Lieberman, produced in 2010 named, “A Blueprint for Reducing Recidivism in Montgomery County, Ohio”.

Rice said, “What if I could offer to each of you the opportunity to be involved in an initiative to reduce criminal recidivism by 50%? It would save children, family, neighborhoods and communities, while freeing up money to be used in other areas of the community. We could enhance our infrastructure. Fix our streets. It will maximize the public-school system to educate kids for the tasks of tomorrow.”

“It addresses the common beliefs of all religions, to see that no person is beyond redemption If I offered this would anyone disagree? It is about helping those who want to help themselves after having been involved in the prison system. The initiative is spreading, and it is working in our own community.”

“Every year 1500 people come home from prison in our area. Men and woman who come home and want to do the right thing. They have done their time. They suddenly realized that the debt is not paid. The debt follows them to the grave and beyond. Try as most of them do, doors are slammed in their faces. They are greeted with hostility from friends, family. The opportunity for employment and social services are denied. Why are we surprised that they return to crime?”

“For those that do stay out of prison, they find themselves living on the margins of society.”

“There are two other issues that also accelerate the recidivism rates. It used to be 100% of those released were on supervised parole. They were helped to find a place to live and work. This is no longer true. More than half of them have no parole and it is being reduced. Fewer and fewer are supervised. Our prisons are 40% over capacity. Released men and women come home with the same baggage they have in prison. Issues with drugs, alcoholism, mental issues.

“The second thing that we should all know is that there are very few lengthy prison sentences. A typical sentence is about 2 years. Most are 12-18 months. The prisons have less programming as their resources are stretched.”

Rice got involved in re-entry about 15 years ago. He realized that he was sentencing the grand and great grandchildren of those he had sentenced before. The second and third generations are being sentenced.

Having served their time, ex-offenders would ask him for help and he would try to help find a place for them to live and to get their driver’s license back. He would try but fail.

Starting in 2004, Rice along with Debbie A. Lieberman, studied the issue. The “office of Ex-Offender Reentry Welcome One-stop Reentry Center was opened in Montgomery county 9 years ago. Thousands have received help that was previously unavailable. They are working with other counties to change legislation to avoid collateral consequences. There are odd laws. If you have a felony record, you could not be a barber and can’t own a construction company. Most of these laws have no relationship to the crime that was committed.

They offer a “Certificate for Qualification for Employment”. You can apply to the court for a document that warrants that they have been good and are safe. Most employers hesitate to hire felons. They are afraid their insurance rates will go high. They could be sued for negligent hiring. The law says if an employer has this certificate and if something goes wrong, they can no longer be sued for negligent hiring.

Recently the center has hired someone to be an in-reach specialist. They will meet with every person coming out of prison in the next 6-12 months and will work with ex-prisoners to create a re-entry plan. The plan will involve solutions for housing, employment, substance abuse programs, mental issue programs and to help them get back in good terms with their family.

There is something in the reentry program for all ex-offenders. First, it is the right thing to do. This is a country of second chances. All religions stress this concept. Secondly, this is not a hug a thug program. They don’t work with people that don’t demonstrate that they are willing to do the hard work to be successful. Third, this will save communities massive sums of money. An incredibly high percentage of the Montgomery County discretionary budget goes to law enforcement. There are constitutional rules mandating what that they must supply for prisoners and law enforcement and if the recidivism goes down the budget will go down.

The program provides the best public safety measures. If a person is on the right track, then they are working, paying taxes and serving as a role model.

Rice said the program needs our support. He is not asking for money and time. He wants us to realize that most ex-offenders coming home don’t want to go back to prison. Talk openly about the subject with others when the subject comes up. Most of them are not bad people. They want to be judged not by what they were in the past but what they are today and what their future might be.

Thank you, Judge Walter H. Rice, for taking the time to explain your excellent program to us.

Perfect attendance awards were given out today. Not to be confused with the “Perfect Attendance Awards” that you received while in grade school, CNO Perfect Attendance is based on a measurement of continuous club involvement behind the scenes or in plain view of others. Small key tabs are awarded to Members for 5, 10, 15, and 20 years on up.

Thank You Notes Sent to CNO This Week

No time for Sergeants this week