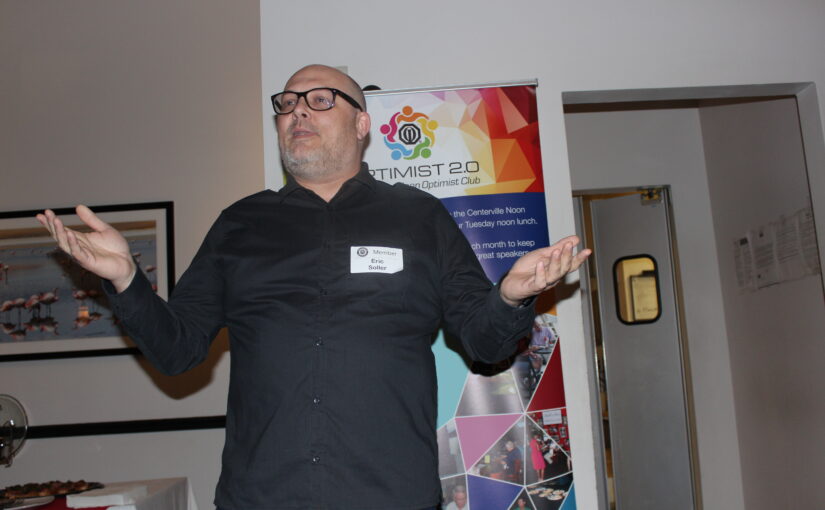 The venue for tonight’s CNO 2.0 meeting was Nelly’s Taste of Bolivia at 79 S. Main St Centerville, Ohio. Thank you to the owner of Nelly’s, Rafael Santillan and his fine team, for the great food and the space.

Greg Griffin announced that the net proceeds from the Christmas Tree lot fundraiser for 2019 was $45,000.

Greg Fay introduced tonight’s speaker, Eric Soller, the owner of Old Scratch Pizza. He and his wife Stephanie opened the restaurant in October, 2016 after a year of hard work. He has been involved in the restaurant sector his whole life, either with restaurants or businesses that supplied equipment to restaurants.

The first location is at 812 S Patterson Blvd and the second one opened in 2019 at 440 Miamisburg Centerville Rd.

Eric’s first job when he was just 15 years old was at Subway. At that time, they cut meat and vegetables themselves at the restaurant. He earned an associate degree in culinary arts right out of High School. Later, he went back to school to learn food and beverage management.

At the end of 1999 he took a job for a food service company serving at grocery stores. They trained grocery stores how to cook for their customers. In 2006 he started a job at Hobart selling restaurant equipment because of his experience in training groceries. He learned a lot of principles from the corporate world that he applies to his restaurants.

While working at Hobart, he couldn’t get the idea out of his head for a pizza restaurant. He wrote business plans for his ideas as a hobby. He loves pizza. While traveling for Hobart he would do research for his ideas. He would go to 4 different pizza places in one night while traveling. With all of these business plans he referred to himself for a long time as a “wantrepreneur”.

The recurring ideas included that his restaurant should have big, long communal tables, like a “Neapolitan Pizza Beer Hall”, and be in a class B business location.

His restaurants are about simplicity. They will always have a simple menu. There might be different items at times, but never more items.

Their service is about kindness and nicety. New employees don’t need restaurant experience, but they need to be nice people. They can train them how to do the work, but it is hard to train someone how to be nice

Old Scratch makes Artisan Pizzas. They make the most complicated pizza in the fastest possible way. Everything in the restaurants, including the sauces and dressings, is made from scratch. He explained how the name of the restaurant came about. Pizza is an old recipe dating back to 900 A.D. and they make everything from scratch, so you get “Old” + “Scratch”.

They receive very high marks for service. Part of the reason for this is how the restaurant works. You still get the services you want while helping yourself with the simple things. You walk in and place your order, pickup your drinks and wait a short time for your food to be delivered to your table.

Hobart was very cooperative when he told them he planned to leave their employment and open a restaurant. He figured out when to let them know. A local news report was about to be published about his plans to open a restaurant. They called him for comment because they saw the application for a liquor license.

Eric and Stephanie love giving back to the community. They have a program called, “Cones for a Cause”. At each restaurant you can have free ice cream. They have a place for you to donate for your treat. They give this money to a local organization or cause each month. They look for small ones where $4000 can make a real difference. In 2019, they raised $50,000 and since 2016 they have raised a total of $140,000. Giving back helps them relate to the community and adds to the culture of their employees. An example of a cause is the Adaptive Color Guard. It is a color guard club for special needs teens and adults.

He said they have had good success. It took a while, but the lines to order started and they have stayed.

Thank you, Eric Soller, for sharing your story with us this evening.

Being a member of either club allows their members all the same opportunities to participate in fundraising and club activities. CNO 2.0 started in 2016 and is very much a part of the 52-year-old Centerville Noon Optimist Club. CNO has given away over $2 million during its history. CNO is a group of like-minded members that are passionate about helping youth and having fun in the process.

The Centerville Noon Optimist and its clubs within a club have annual fundraisers and community activities.