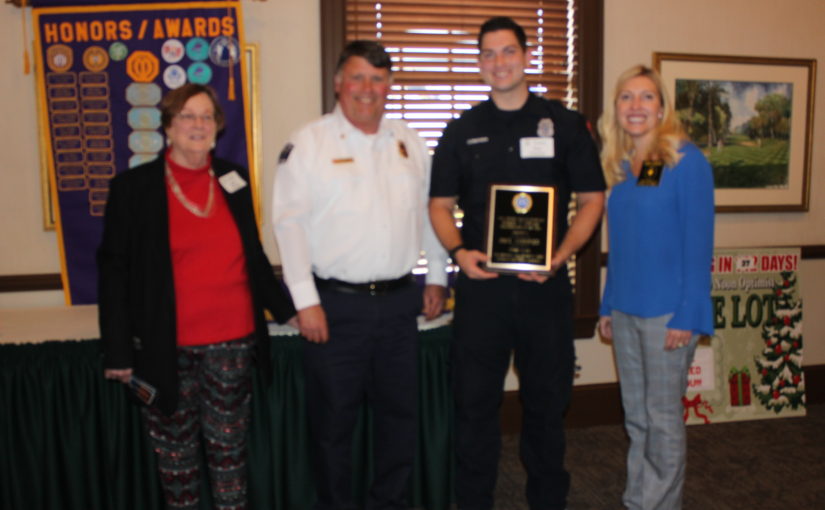 Stan Fronzaglia announced that the next Build-a-Bear for kids with cancer and their siblings is October 25, 2018 at Children’s Hospital. Volunteers setting up should arrive at 4:30 PM; others should show up at 5:30 PM.

Judy DeMarco stated that Bill’s Donuts is taking donations for relief for people affected by the hurricane in Florida. A semi-truck has been arranged to deliver the donations received to the area.

Melissa Deeter from the CNO 2.0 committee announced that at 5:30 on Thursday 10/18/2018 at the CNO 2.0 meeting at Ollie’s the speaker will be Ryan Hawk and the teacher of the quarter award will be given.

Casey Wycoff announced that Edward’s Jones is collecting Toys for Tots. She will wrap the toys for you and give them away.

This year’s honoree and recipient of the “Robert J. O’Toole EMT/Firefighter of the Year Award” is Firefighter and EMT Paul Conover. Paul joined the department in October of 2016 at the age of 23 and he is a resident of Centerville.

This award is to honor the memory of Ruth and John’s son Robert J. O’Toole. Robert lost his life January 12, 1998 after responding to an accident.

Bob Burkman gave details about the award and introduced Bill Gaul, the Washington Township Fire Chief and fellow CNO member. Bill thanked Gary Anderson for starting this award. He also thanked Ruth O’Toole for joining us today. Bill thanked the Centerville Noon Optimists for having this award each year.

For 28 years there is a firefighter memorial ceremony each year where now 71 names are read of fallen firefighters. The firefighters recognized are those that died in the line of duty since 1857. The ceremony has taken place for 28 years. They read a name and ring a bell and continue the process until all of the names have been read.

Firefighter Paul Conover is an outstanding Firefighter/EMT who comes to work each shift with the drive and desire to learn and better himself. He is currently working to complete his paramedic certification while continuing to develop and improve his firefighting and EMS skills. Paul follows orders well, completes tasks promptly and efficiently and is always asking for additional assignments and projects. Paul is positive, upbeat, considerate and professional with his coworkers as well as members of the community. Recently Paul has taken on the responsibility of organizing a fire equipment stockroom and is in the process of cleaning and maintaining the equipment. Paul also assists with maintaining training records and hose records.

Firefighter Conover was awarded the 2018 Washington Township Part Time Employee Award of Excellence. The award is made annually to employees nominated by their peers who have made a valuable contribution to the mission of Washington Township.

Bill explained, “Paul has a true passion for his job. He also exhibits leadership skills. The reward is not just for people who have saved a life. I’m sure he will do something heroic, but at an early age it is great for him to be an asset to the department.”

Bill Gaul introduced Paul Conover and gave him his award.

It was mentioned that Paul Conover received his Eagle Scout rank in 2012. He is currently working on his  EMT paramedic certification.

More information about today’s award from Bob Burkman
Twenty-five year old Bob O’Toole always wanted to be a fireman. He was a part-time Firefighter/EMT with Centerville/Washington Township for four years and had just started part-time with Clearcreek Township in December 1997. With these 2 part-time jobs he considered himself a full timer. He was attending Sinclair Community College for Paramedic Training. His life was taken while in the service of our community, doing the job he loved. Bob O’Toole and John Kalaman’s names are forever linked, as a result of the tragic accident that took their lives.

The Tri-Fold on your table describes the events that lead to the deaths of Bob O’Toole and John Kalaman. It also mentions the late Optimist Terry Blair’s influence in establishing this award in 1998. Special thanks to Gary Anderson and Jesse Gaither at Minuteman Press for producing this tri-fold.

Today Becky Keegan was inducted into the Centerville Noon Optimists. A few minutes later she won the 50/50 drawing! What a wonderful way to welcome a new member. Hopefully Daniel Koons, who was today’s other inductee, wins a 50/50 drawing soon!