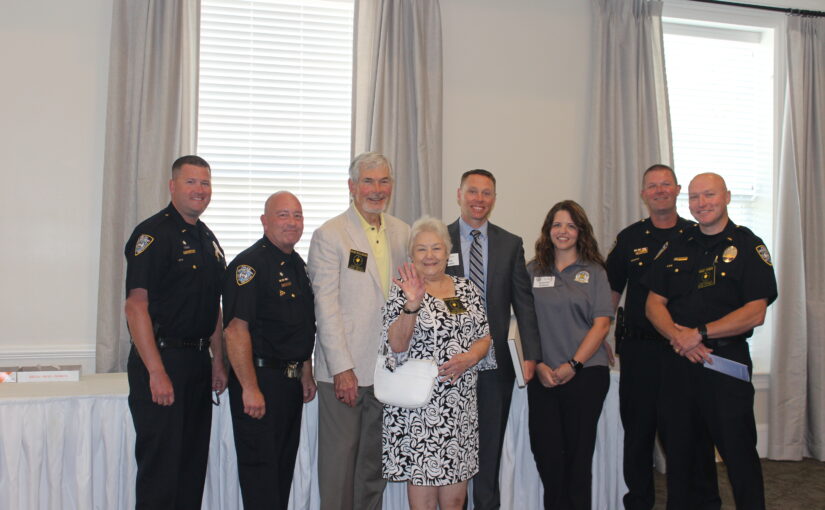 It takes a special kind of person to put on a uniform day in and day out to protect and defend us all; those who support them and those who question their every move and decision.  Lord, please give our sisters and brothers in blue wisdom in every situation they face, peace of mind that they did their very best in every situation and surround them in Your everlasting love and protection.

The emcee for today’s awards was Bob Burkman. John and Paula Kalaman were present today for the awards. Paula spoke at the end of the ceremony and reminded us how wonderful she and John think CNO and the community is to them and the memory of their son. She said that the award winners today should be especially proud since they were chosen by their peers.

Those nominated are typically employees who have exhibited excellence through special accomplishment or a daily commitment to the mission and values of the department. This commitment is typically exhibited through the employee’s outstanding work product, attention to detail, exemplary treatment of the public and cheerful and cooperative attitude with co-workers.

You can view the Tri-Fold Brochure for the 2021 John P. Kalaman Respect for Law Awards here.

Kaercher was unanimously nominated for the John F. Kalaman Respect for Law Award by his peers based on his devotion to duty, knowledge and tireless dedication to his profession. He began his career with the Centerville Police Department as a patrol officer on July 28, 2008. Some of Det. Sgt. Kaercher’s many roles have included patrol officer, detective, physical fitness coordinator and sergeant. After months of research and testing, he implemented a new software program that has streamlined the department’s scheduling and payroll process. Det. Sgt. Kaercher is generous in mentoring fellow officers (notably younger ones) in patrol tactics and assisting with investigations. He has received numerous awards and letters of recognition and has brought credit and pride to this department.

Coworker Excerpts of Recommendations for Kaercher

Throughout my time working with Sgt. Kaercher, 1 have known him to be one of the most knowledgeable and dedicated officers we have in our ranks. Sgt. Kaercher is routinely willing to aid fellow officers (notably younger officers) with investigations and patrol tactics/advice. I can personally attest that he has been of great help regarding OVI enforcement.

Sgt. Kaercher was contacted by the Versailles KY Police Department to assist with a homicide investigation in their jurisdiction. He took the lead and obtained search warrants for property within the city limits and evidence collection leading to indictments in Kentucky, based upon information from that investigation, he is investigating similar acts involving the suspect which may lead to additional charges.

Sgt. Kaercher also played a major role in solving many vandalism complaints throughout the city where businesses and a religious building were damaged. Sgt. Kaercher was able to research the vehicle owned by the suspect, obtain photos, and a confession leading to an arrest and the clearance of many cases. It should be noted Kaercher performed this investigation while assigned as the staff sergeant and not the primary investigator, this showed his initiative in working a case.

Rob Streck, the Montgomery County Sheriff, could not come to today’s ceremony. In his place Chief Deputy Daryl Wilson presented the award to Deputy Jonathan Petry.

Petry began his law enforcement career in 2013 with the Montgomery County Sheriff’s Office and was promoted to deputy sheriff in 2015, serving in Jefferson Township, Harrison Township and Washington Township. Since November 2020, Jon has been WTs Community Oriented Policing deputy.

During the pandemic Jon took the initiative to build relationships with hotels and motels in the Township. From this relationship MCSO deputies were able to quickly and strategically address trespassing issues and loitering concerns that had the potential to become detrimental to the business community.

Working with all the neighborhood watch groups in the Township, Jon has not only grown the size of these neighborhood watch groups, but the number of them as well. He has started additional social media talk groups, participated in platforms such as Ring, Next Door and Facebook, assisted residents with locating missing pets, addressed speeding concerns and provided assistance in solving thefts and burglaries. Using the Community Resource Trailer, Jon has assisted with feeding hundreds of Centerville School students during the COVID-19 pandemic and dropped off supplies to residents in need. Jon is the epitome of the team player who is always willing to help where needed. His selfless leadership to the community along with his dedication and passion to the residents of the Township are exemplary.

About the CNO Awards from Bob Burkman

After the tragic events of January 12, 1998, Centerville Noon Optimist member and then township trustee, the late Terry Blair became the driving force to name our club’s Respect for Law Award in honor of John Kalaman.

There are many reminders of John Kalaman within our community.  There is a John P Kalaman Memorial Golf Tournament held here at Yankee Trace Golf Course, which funds a scholarship in John’s name, and a yearly blood drive is held in his name.  The City of Centerville named a street for him.

Our Sergeants at Arms decided this week to suspend fines out of reverence for John. Kalaman and Robert O’Toole.

No Thank You Notes received this week.