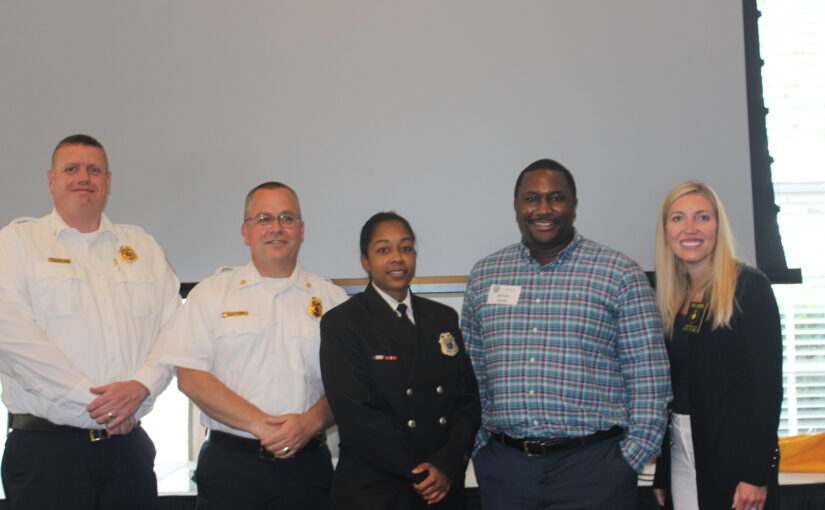 At the start of the meeting, David Ladd led us in a prayer for Gary Aiken, who passed away on October 3, 2021. Gary was a great man and a huge inspiration to his fellow members of the Centerville Noon Optimist Club. Gary joined CNO on 6/1/1982. He will be missed but remembered.

Gary Hansen was officially sworn in as CNO president by Pat Behn during today’s meeting. We look forward to a great year under your leadership Gary.

Mike Bevis, the chair of the Tom Frazier Tee Off for Youth Golf Classic, introduced Adam Blanchard, who came today to accept the $11,000 donation for Dayton Children’s Hospital hematology and oncology department.

Adam said this year’s donation will be used to pay expenses incurred by kids that need highly specialized care at other hospitals. Adam said that CNO’s total donations to Dayton Children’s is now over $200,000.

10/23/2021 6 PM to 10 PM, Wine and Beer tasting party at the home of Patrick and Diane Arehart. The cost is $20 which includes all the wine and beer you taste. Everyone is asked to bring a dish to pass. The price is $5 if you will not be having any of the supplied wine and beer and you are BYOB. To register, contact Debe Dockins or Sue Jessee.

The EMT/Firefighter award honors the memory of Ruth and John’s son Robert J. O’Toole. Robert lost his life on January 12, 1998 while responding to an accident.

This year’s recipient is firefighter and paramedic Mariana Jones. CNO presented Mariana a plaque and her name will be added to a larger plaque at the Washington Township Fire Department headquarters building.

Good afternoon. My name is Scott Kujawa, and I am the Fire Chief for the Washington Township Fire Department. It is my honor to be able to stand before you today to present this award.

On January 12,1998, Firefighter Robert O’Toole and Officer John Kalaman paid the ultimate sacrifice while serving our community. These two men will never be forgotten by the Washington Township Fire Department, Centerville Police Department, or our community. I want to thank the Noon Optimist Club of Centerville and the entire O’Toole family for their continued support and remembrance of Firefighter O’Toole through the Robert J. O’Toole EMT/Firefighter of the Year Award.

Now, to recognize this year’s recipient:

Firefighter/Paramedic Mariana Jones has been a career member of the Washington Township Fire Department since July 2018. She joined our department with several years of experience from the Harrison Twp and Sugarcreek Twp fire departments. In 2014, she received a rookie of the year award and in 2016 a firefighter of the year award, both from the Sugarcreek Twp Fire Department.

Mariana was an outstanding addition to our department. She is an exceptionally competent firefighter and paramedic while continually striving for improvement. She is professional and respectful to the citizens and visitors of our community, as well as every one of her coworkers. Mariana brings a positive attitude which is contagious and reflective of who she truly is as a person. She exemplifies this attitude and encourages others to maintain the same positive outlook.

Mariana has a true passion for the EMS side of our profession. She is part of the team that developed and implemented a new continuous quality improvement program for the review of EMS reports. Not only did she help develop this quality improvement program, but she is also one of the report reviewers. Her passion for the job spills over into her review of the reports. She wants to assure that our paramedics are always providing the best care possible.

Her work on the EMS Committee has created more effective ways of providing service to our community. While EMS reports alone keep her busy, she doesn’t stop there and gives an all-out effort every day she comes to work. Mariana’s work ethic and job performance are second to none and she is truly deserving of the Robert J. O’Toole EMT/Firefighter of the Year Award.