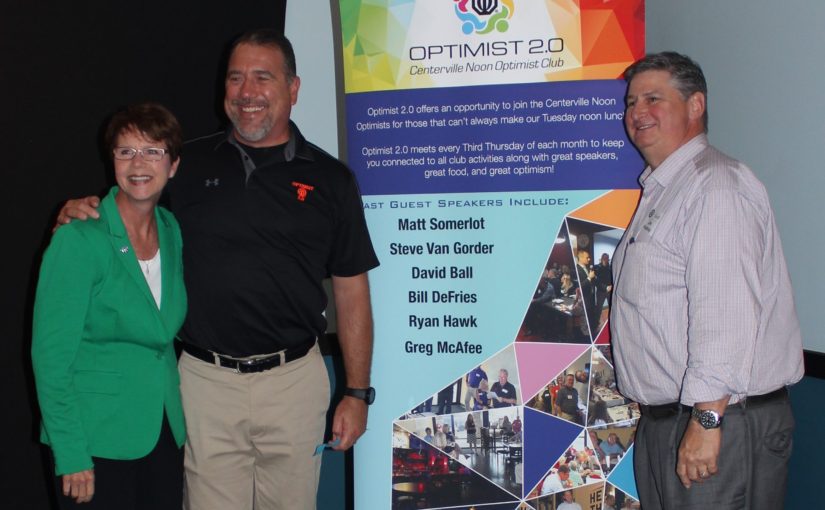 The venue for tonight’s CNO 2.0 meeting was at Poelking Lanes South in Miami Township, Ohio. Thank you to Joe Poelking, the owner of the venue, for donating the VIP Bowling Lounge for our meeting with complimentary bowling and for obtaining and introducing tonight’s speaker, Ohio Supreme Court Judge Sharon L. Kennedy.

There was a 50/50 drawing won by Greg Fay who donated it back to the Optimist International Foundation.

Greg Fay, the chair of CNO 2.0, thanked everyone for attending tonight. He introduced and thanked tonight’s host, Joe Poelking.

Part of the checks and balances of power in the U.S. and Ohio is the judicial system.

There are several types of courts with varying purposes in Ohio.

Mayor’s courts handle things like traffic tickets and misdemeanors. They don’t have trials. The cases they can’t hear are transferred to other courts.

Municipal courts are the worker bees, hearing as many as 3 million cases per year in Ohio.

The Court of Claims hears cases of civil actions filed against the state.

The Court of Common Pleas includes the Probate court. She called the Probate Court the Happy and Sad court. They handle adoptions as well as handling estates.

There are 12 Appeals Courts. There are as many as 3 million cases heard in the Ohio courts system. Only about 7000 to 9000 are appealed. The court system is nowhere near perfect. The number of appeals cases should be higher. The number is as low as it is because it is very expensive to appeal a case.

The Ohio Supreme Court hears about 2200 cases per year.

A detailed description and chart of the Ohio Judicial Structure can be read here.

Ohio in 1851 was unstable and essentially bankrupt. Until 1851, Ohio judges could be fired, and they were every time new leadership was elected. Judge Kennedy said we should read about the great debates of 1851. She found these debates to be very exciting. The debates led to 6-year terms for Ohio Supreme Court judges and helped stabilize Ohio.

Judge Kennedy told us that as citizens of Ohio, we are the judicial system since we choose the judges. She said we should know our judges. Judges now are more accessible than ever. She said we should know who all of our government representatives are. You should have them on your speed dial and call them when you want them to do something or to do something different.

There are no term limits for a judge, but you cannot run for judge if you will be 70 or older before your term begins.

Thank you, Judge Kennedy, for taking the time to come and speak to us today.