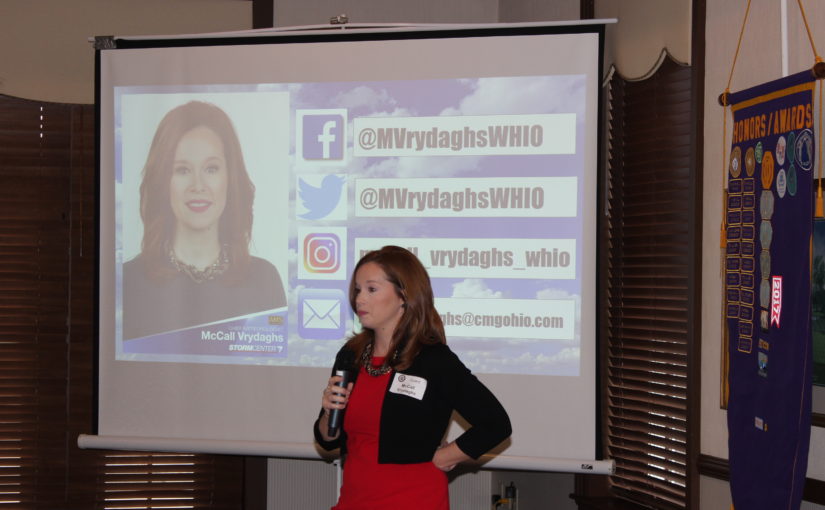 Heavenly Father direction not desire will indicate where we will end up. In other words we all are going to end up somewhere, so we might as well choose the path that will take us to where we want to end up.. This is a universal truth here as well as the kingdom of God. How much of our life are we willing to exchange for it. In any event we have two problems. One : we lose bragging rights when it looks so easy that no one realizes how hard it was. Two: is that the chance of being seen is in direct proportion to the stupidity of the act. So help us choose
wisely Lord. Amen!

The fourth quarter President’s award was presented to Pat Behn at the Great Ohio District convention. Our Club was #1 in the Awards and Achievement category with 3310 points. In second place was Kettering Noon. Thank you, Jean Pummill, for keeping track of everything everyone does in our Club.

The following were recognized as having sponsored 5 members: Carolyn Taylor, Sue Brubaker and Beth Duncan.

Tri-Star Soccer will be early evening on Friday September 6, 2019. Volunteers are needed to host this fun, annual event. Contact the chair Chris McAlpine.

There is no meeting at Yankee Trace on Tuesday September 24, 2019. The Presidential Installation dinner will be that evening instead.  Look for information about signing up to attend this event.

Myron Reported on the Great Ohio District convention this past weekend. It went great and he appreciates all the support he has received from our club and others as his Governor year begins on October 1, 2019.

Judy DeMarco announced it is time to accept nominations for the Optimist Community Champion award.  Contact Judy for information regarding this award.

Don Wildenhaus announced that TOP Soccer registration went well. You can still volunteer Players and coaches can sign up here.

Tom Novak announced that after the Labor Day flag delivery, the Avenue of Flags storage facility is moving to Sinclair’s facility on Clyo road. Flags will be picked up at Turf Nerd and when you return the flags, return them to Sinclair.

Greg Griffin announced that the Christmas Tree Lot opens in 101 days. Thanksgiving comes as late as it can this year on November 28, 2019. We have ordered 975 trees and are expecting to sell them in 2 weeks since it is so close to Christmas.

Bob Lawson updated us on the new general storage area for CNO items other than flags. The new location is at the park district headquarters behind Marion’s Pizza on SR 48. There are only going to be 2 sets of keys. We are not allowed to make additional copies. The key holders are Bob Lawson and Jerry Stahley.

McCall showed us a slide show and discussed the storms and the situations leading up to the historic storm system that occurred on May 27, 2019.  The Memorial Tornado “breakout” brought 15 tornadoes to the area. There were 21 tornados covered by the National Weather Service in Wilmington, Ohio which set a record.

As many as 4 tornados touched down at the same time during the outbreak. Tornados can come down, go back up and come down again. One of the tornados was headed straight for Dayton Children’s Hospital. Luckily it raised back in the sky before reaching the hospital.

Earlier in the day, McCall was on social media reporting that there would be thunderstorms and hail coming. By 4:30 PM, she reported that tornados are very possible. By 8:08 PM, she knew devastation was imminent.

At 10:50 PM, a Tornado Emergency was issued. This is the highest level and it is described as “an extremely dangerous tornado with life threatening impacts”. These are the types of warnings that typically only happen in Kansas and Oklahoma.

With the day being a holiday celebrated outside, she said we were lucky that the storms didn’t happen until the time they did, as there could have been a much higher level of human devastation.

Links McCall Vrydagh had in her presentation

No readings nor inductions this week.