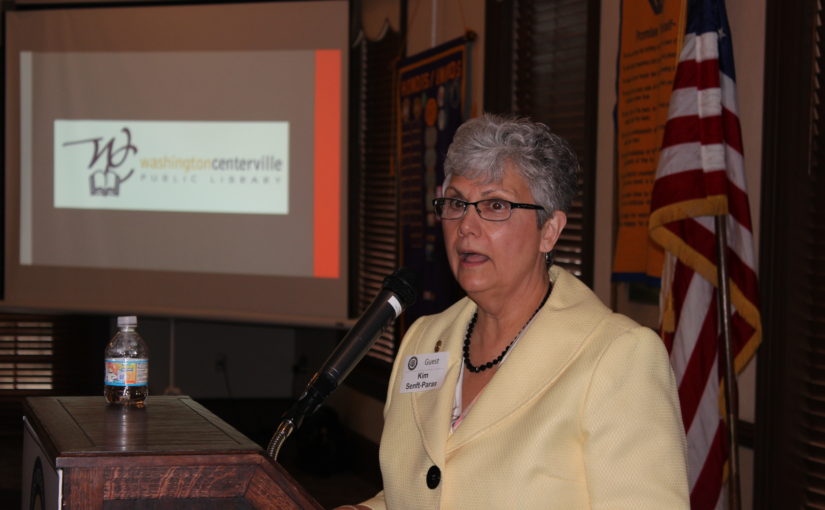 Donna Huss told us about The President’s Third Quarter Recognition award which is based on an individual who is a champion of our work for and with kids. This quarter CNO member Greg Griffin received this award. Greg chairs the Tree Lot and Co-chairs the Easter Egg Hunt. He sets up the sound system and projector for speaker slide shows. He prints name tags for all guests. He is the photographer each week at lunch and at the District Convention. Greg helps with maintaining membership data, established the coded badge system and sends club e-mail communications. There are other items not listed here. Thank you, Greg Griffin, for all you do for our club!

Myron Rheaume, Ohio Governor Elect, announced at the District meeting that 71 of our members have earned new PGI/PDP awards, which represented several levels of achievement. He handed out the awards to the members that were present.

Myron also announced today that the Optimist International President is planning to attend our Ohio State District Convention in August, 2019.

Donna Huss announced that Safety on Wheels (AKA Bike Rodeo) will be held on Saturday May 18th, 2019, from 9 AM to 12 Noon at Miami Valley South Hospital (RAIN or SHINE). The event is done in conjunction with the Centerville Police Department. Local police officers will be doing the bicycle checks. There will be a raffle, bicycle-based games, prizes, free helmets and gifts available. All ages of children are invited to join in for the safety and fun. They could use more volunteers. Paul Boeckman is the chair of the event.

Nancy Lehren announced that the next Build-A-Bear event will be on Friday, May 10th, at Children’s Medical Center. The event could use a few more volunteers.

Jerry Stahley, chair of the OI Junior Golf Championship, is selling raffle tickets for the event. The price is 6 Tickets for $5 and the prize is a case of wine. Tickets will be available for the next few weeks.

Gary Anderson announced that the Respect for Law Awards will be presented at the meeting next week.

Laurie Poeppelman and Evelyn Griffin announced they are taking orders for embroidered Opti-Gear spring items for the next few weeks at lunch. Last lunch to order is May 7, 2019.

Jerry Stahley said that on May 31, 2019 there will be a Dayton Area Optimist Club Dayton Dragon’s night for $10/ticket.

Donna Huss announced that on Monday, May 6th at 5:30PM, CNO will be featured on the William Pace Show on Spectrum Cable Channels 991 & 995. CNO member Mike Bevis is interviewed on the show.

Gary Smiga introduced Kim Senft-Paras, who since 2009 is the Washington-Centerville Public Library Director. Kim has created a vibrant Friends of the Library group, expanded library programming and planned and led the renovation and expansion of Woodbourne Library.

Kim holds a Bachelor of Arts in Psychology from Miami University and a Master of Library Science from Kent State University. She is also a Certified Public Librarian. Kim feels privileged to work in such a fine library system, located in a warm and welcoming community. Kim came to us to discuss our library.

She explained that librarians don’t just “shush” people and read books. They do many other things to help the community. The library asked the community to, “Envision the library of the future” and asked, “What do you hope to see?”

Their mission statement is, “The library is our community’s connection to diverse opportunities for education enrichment and engagement.”

There are many programs available at the library:

She showed us a slide of the Children’s Gardens that CNO donated $25,000 for last year, and thanked us for our generosity.

The library’s sources of income are:

There is a board of advisors guiding how to spend their money.

The library’s expenditures are:

When asked about the parking lot situation at the Centerville location of our library system, she said that they know it needs major repair, but they could not close the lot and the library until Woodbourne was renovated. The contractor began surveys of the parking lot and it will be renovated soon.